The new OnePlus 6 smartphone will carry a glass body finish and a notch display which will enhance the overall feel of the device. 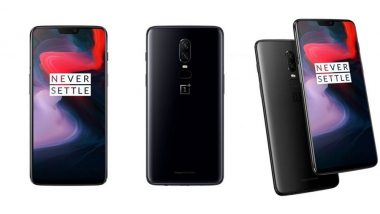 These may be the first glimpse of the much awaited OnePlus 6 flagship smartphone from the Chinese smartphone maker, thanks to Amazon. Scheduled to launch globally on May 16, the upcoming smartphone was listed on the Amazon Germany that was immediately taken down. Spotted by a German tech site - Winfuture, the site later reported the images mentioning they were originally posted by the marketplace. According to the report from the German tech site, the new OnePlus 6 handset will be made available in two colour options - Mirror Black and Midnight Black. However, Pete Lau (OnePlus CEO) and Amitabh Bachchan were recently spotted with a smartphone with two colours - White and Black. Exact details for the smartphone will be revealed at the launch itself. See More: New OnePlus 6 Images Leaked Online Ahead of India Launch; Exchange Programme Revamped

Going by the specifications listed on the marketplace, the new OnePlus 6 will sport a 6.28-inch AMOLED display with 19:9 aspect ratio and 2280 x 1080p resolution. The device will come powered by Qualcomm Snapdragon 845 with option of 4GB of RAM, 6GB RAM & 8GB for 64GB variant, 128GB variant and 256GB variant respectively. The smartphone will also sport Corina Gorilla Glass 5 and IP67 or IP68 certification, USB Type-C port, Dash Charge, Android Oreo 8.0 out-of-the-box (Android P up-gradable) and much more. The smartphone will also carry vertically aligned 16MP dual rear camera with dedicated flash along with a 20 MP front camera for selfies and video calling. With few hours left for the launch of the new OnePlus 6 smartphone, expect more surprises from the Chinese smartphone maker.

(The above story first appeared on LatestLY on May 14, 2018 09:50 AM IST. For more news and updates on politics, world, sports, entertainment and lifestyle, log on to our website latestly.com).