Smartphone brand realme is set to launch a new device with MagDart wireless magnetic charger which will be the first in the Android ecosystem. 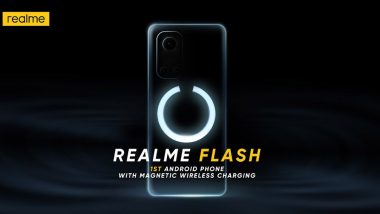 New Delhi: Smartphone brand realme is set to launch a new device with MagDart wireless magnetic charger which will be the first in the Android ecosystem. An apparent take on Apple's MagSafe technology, the realme Flash smartphone will use magnetic wireless charging. Looks bulky in the first look, Realme MagDart will clip onto the back of the device and pump out an undisclosed amount of power, reports GSMArena. Realme Buds Q2 Neo Earbuds To Be Launched in India on July 23, 2021.

"The charging speeds will exceed 15W and that Realme's solution will be the fastest magnetic charger in the world once it launches," the report said on Monday.

In our quest to be the pioneers of technology, we created #realmeFlash.

It's the world's first Android Phone with Magnetic Wireless Charging!

The charger also packs a USB-C connector. The smartphone will have one 12GB and 256GB variant. ‘Realme Flash' with a triple camera system at the rear is likely to house Snapdragon 888 chip with Android 11 with Realme UI 2.0 on top. MagSafe is a new feature on all iPhone 12 models that allows for magnetic accessories to be attached to the back of the devices.

The MagSafe technology features an array of magnets around the wireless charging coil at the back of the iPhone 12 in a beautifully placed ring, optimised for alignment and efficiency. MagSafe chargers efficiently provide up to 15W of power, while still accommodating existing Qi-enabled devices, meaning you can still use any standard Qi-compatible wireless charger.

(The above story first appeared on LatestLY on Jul 27, 2021 05:41 PM IST. For more news and updates on politics, world, sports, entertainment and lifestyle, log on to our website latestly.com).