Giant Lizard That 'Eats Anything It Wants' Seen in Georgia, Know More About This Argentina Tegu Species 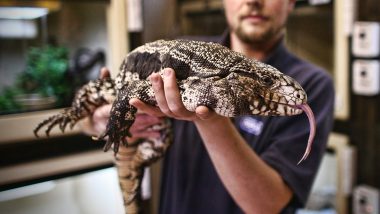 First reports of murder hornets and now giant lizards, things are only appearing worse in terms of danger this year. While the world is already braving on a pandemic of Coronavirus, there are reports of such invasive species coming in. The giant lizards have been spotted in the wild in Georgia and authorities are working on to kill them because of their threat to wildlife. These lizards which grow upto 4-feet can eat anything including plants, birds and other animals. These lizards are known to be in Florida but after their sighting in Georgia, state wildlife authorities have asked for help from the public to report these dangerous reptiles. 'Murder Hornets' in US For The First Time; Know About The Largest Wasps That Kill Almost 50 Humans Per Year!

These are black and white tegus lizards native to South America. And although they do not attack humans, they pose a great danger to protected wildlife. They usually feast on eggs of alligators and tortoises. Officials say these are either escaped or released pets that are on the loose. As per biologists, these lizards are in the Toombs and Tattnall counties in southeast Georgia. The officials have released a video to ask people to report immediately if they see these around. The authorities have released a video to let people know about these lizards so they can trap them soon.

John Jensen from Georgia Natural Resources Department, mentioned how these lizards "eat just anything they want, plant and animal matter." People have also been advised to not keep their pets outside.

Know More About The Argentina Tegus:

The Argentine black and white tegu or the giant tegu is the largest of lizard species. They are an omnivorous species, so they eat a range of invertebrates, fruits, seeds, eggs of birds and other reptiles. They can also prey on turkey, rodents and small alligators. They are usually kept as pets but they are so intelligent that they can make an escape from captivity. They have an aggressive behaviour and can bite strongly. Because they have strong jaws, their bite can be damaging. They are known to multiply really fast with a female capable of breeding 35 eggs a year. Tegus are capable of running at high speeds. They often use this method in territorial defense.

(The above story first appeared on LatestLY on May 14, 2020 08:25 PM IST. For more news and updates on politics, world, sports, entertainment and lifestyle, log on to our website latestly.com).