According to researchers at Johns Hopkins Medicine, the Massachusetts Institute of Technology (MIT) and Rice University in Houston, silicone breast implants with a smoother surface design have less risk of producing inflammation and other immune system reactions than those with more roughly textured coatings. 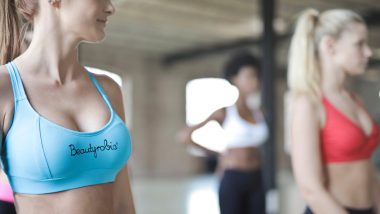 Washington, June 24: According to researchers at Johns Hopkins Medicine, the Massachusetts Institute of Technology (MIT) and Rice University in Houston, silicone breast implants with a smoother surface design have less risk of producing inflammation and other immune system reactions than those with more roughly textured coatings.

A summary of the experiments is published in the Journal Nature Biomedical Engineering.  Breast Implant Illness Should Be Mentioned to Women Wanting Enhancements, Say Surgeons; Everything You Should Know – Symptoms, Causes and Prevention

Results of the experiments using mice, rabbits and samples of human breast tissue advance knowledge of how the body responds to such implants, providing new information to physicians and affirming the benefits of certain smoother surfaces, the researchers say.

Breast implants, surgically inserted following mastectomies or to augment breast size, can be filled with either saline or silicone, but both types have a silicone outer shell. Previous studies showed that most of the 400,000 women each year in the US who receive silicone implants will need to have them replaced within 10 years because of pain and shape-shifting of the implant caused by immune system cells that contribute to scarring and fibrous tissue.

"Our aim is to provide patients with as much information as possible so they can make informed decisions to guide their own personal health," says Joshua Doloff, PhD, assistant professor of biomedical engineering at The Johns Hopkins University and a first author of the research, which began during his postdoctoral training at MIT.

Doloff, whose research overall focuses on the interface between implantable devices and the human body, says scientists have long known that the immune system biologically walls off foreign objects in the body by creating inflammation and scarring that can be disfiguring and painful.

For the past decade, scientists have been examining how to design implant surfaces in ways that reduce such effects.

Previous studies found that implants with absolutely smooth coatings produce strong immune rejection responses over time, and according to Doloff, they may also more easily "flip" inside the body and contribute to a higher rate of replacement.

So, manufacturers also marketed implants with textured surfaces to try to address immune system rejection and to "stick" like Velcro to human tissue, enabling better and more stable positioning in the body. More than 90 per cent of breast implants used in the US are characterized as smooth, according to the researchers, whereas most implants used outside of the US.

An implant with the highest degree of the textured surface was taken off the U.S. market in 2019 because of its links to higher rates of a type of cancer called breast implant-associated anaplastic large cell lymphoma among patients with these "macrotextured" implants.

In the current study, the researchers analyzed outcomes of placing in mice tiny versions of implants with five different surface designs. The implants included one with a completely smooth surface, one slightly contoured at the level of an individual human cell, as well as others with different surfaces. Of note, they also implanted one with the 90-micron macrotextured surface like the implants taken off the market.

Establishment Labs helped manufacture the mini-implants, using similar manufacturing methods used in the market. Two of the full-scale commercial implants, including one with a surface design that includes a roughness of approximately 4 microns on average as well as other characteristics including skewness and the number, distribution and size of contact points, are also manufactured by Establishment Labs, which funded the research.

Among human-scale size implants used in rabbits, the implant with design features that include a 4-micron surface roughness resulted in the least fibrous tissue surrounding it -- about 10 times less- at three weeks and six months post-implantation when compared with the 90-micron implant.

The tissue surrounding implants in mice and rabbits with the specific design that includes a 4-micron roughness had the highest activity of the gene FOXP3, suggesting the production of more immune cells called Tregs, which act as a traffic police to reduce the amount of inflammation and fibrous tissue created by immune system cells.

The research team also sequenced genetic expression levels from specific cell types in the tissue surrounding implants in mice to find that genes associated with pro-inflammatory responses, including STAT1 and CXCL10, increase about fivefold to tenfold with more highly textured implants.

Among tissue collected from implants removed from 15 healthy patients at the University of Texas, MD Anderson Cancer Center in Houston and the Costa Rican Institute for Research and Teaching on Nutrition and Health Foundation, patients with implants with design features that include a 4-micron surface roughness had the most significantly reduced fibrous tissue formation surrounding the implants compared to the more heavily textured devices or to completely smooth ones.

Doloff says other areas of active research for implantable devices include the development of biosensors that can detect rupture, leakage or inflammation of surrounding tissue. He says the surface design that includes roughness of 4 microns may be worth studying in biomaterials other than breast implants. He also plans to study the amount of immune response, inflammation and fibrous tissue among implants in women following cancer diagnosis and treatment.

"Engineers should know how something works, not just that it works, so we can improve on existing technologies, said Doloff. (ANI)