It has been 3,000 days since the rover has been exploring the red planet, uncovering more clues. To celebrate living the good science life on Mars, the Curiosity Rover captured and shared a stunning panorama of the red planet. 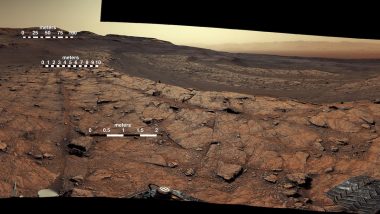 Mars may be a barren desert with no alien life, that we know of yet, the Red Planet certainly isn’t lifeless. All thanks to Earth’s ambitious space programs, several robotic scientists explore the Martian surface as well as its skies. The Curiosity Rover, also called the Mars Science Laboratory, is one of NASA’s most ambitious interplanetary missions. It came in for a dramatic and incredible landing on the red planet’s enormous Gale crater in 2012, and the SUV-size rover did not take long before it found evidence that water previously existed on Mars. It has been 3,000 days since the rover has been exploring the red planet, uncovering more clues. To celebrate living the good science life on Mars, the Curiosity Rover captured and shared a stunning panorama of the red planet.

The Curiosity touched down on Mars on August 6, 2012. It keeps on making new discoveries during the gradual climb up Mount Sharp, the 5-kilometre-tall mountain it has been exploring since 2014. The car-sized Mars rover designed to explore the Gale crater on Mars, has been sharing pictures of the red planet. The images have coloured in the dreams of thousands of space enthusiasts, and our understanding of what the closest, potentially habitable planet looks like has grown into each photo.

Like sands through the hourglass, so are the sols of our lives. Can you believe I've been here for 3,000 Martian days?

A Martian day, called a ‘sol’ is slightly longer than a day on Earth, clocking in at just over 224 hours and 39 minutes. Researchers track Curiosity’s activities based on sols. NASA marked the special occasion of the rovers 3000th Martian day with the release of a glorious panorama. The scenic view of the Gale crater on Mars shows part of Mount Sharp, the massive central mountain inside the crater. “Geologists were intrigued to see a series of rock “benches” in the most recent panorama from the mission,” NASA wrote on its website.

Stitched together from 122 images taken on November 18, 2020, the mission’s 2,946th sol, the panorama was captured by the Mast Camera, or Mastcam. It serves as the rover’s main “eyes.” Curiosity is currently on its way toward a region of the crater known as the “sulfate-bearing unit,” to find more clues as to how the climate and prospects of life changed nearly 3-billion years ago.

(The above story first appeared on LatestLY on Jan 15, 2021 11:12 AM IST. For more news and updates on politics, world, sports, entertainment and lifestyle, log on to our website latestly.com).