Massive Asteroid Apophis to Cause Doomsday by 2068? ‘God of Chaos’ Gains Speed As It Travels Towards Earth!

The Apophis asteroid named after the God of Chaos has garnered pace on its journey towards Earth. According to the researchers at the University of Hawai'i Institute of Astronomy, the asteroid is under the influence of the Yarkovsky effect. Experts have warned that the asteroid could hit our planet in 48 years. 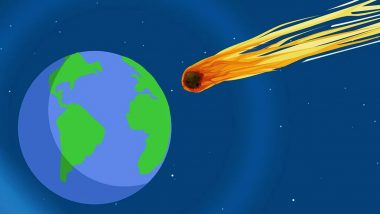 The Apophis asteroid named after the God of Chaos has garnered pace on its journey towards Earth. According to the researchers at the University of Hawai'i Institute of Astronomy (IfA), the asteroid is under the influence of the Yarkovsky effect. Experts have warned that the asteroid could hit our planet in 48 years. It has gained speed due to non-uniform radiation that acts like a tiny thruster. Before the discovery, the impact was considered impossible, but new findings suggest that the asteroid has a chance of crashing into Earth on April 12, 2068. According to ufologist Michael Horn, it Apophis would crash into Earth, the impact point would be somewhere in Europe. If the claims prove right, will doomsday arrive in 2068? Monster Asteroid ‘Apophis’, Named After Egyptian ‘God of Chaos’, Will Hit the Earth: SpaceX CEO Elon Musk.

Apophis is more than 1,000 feet wide and its impact would be equivalent to 880 million tons of trinitrotoluene (TNT) exploding all at once. Astronomers discovered Apophis on June 19, 2004, at the Kitt Peak National Observatory in Arizona. Since then it has been tracked as it orbits the sun, which it completes less than one Earth year. Researchers spotted Apophis with the Subaru telescope earlier this year and found that it had picked up speed following the analysis, known as the Yarkovsky effect.

When the body of the asteroid heats up in sunlight, it re-radiates the energy away as heat. Before the effect happened, an impact in 2068 was impossible, but it has changed some pattern since then. Also, the Yarkovsky effect makes it difficult to make long term predictions about how an asteroid will move over long periods. ‘God of Chaos’ Asteroid to Hit Earth in 2029? Elon Musk Warns of ‘No Defence’! Here’s Everything to Know About the ‘Doomsday Alert’.

Talking about the asteroid, Dave Tholen, one of the astronomers was quoted as saying, "The new observations we obtained with the Subaru telescope earlier this year were good enough to reveal the Yarkovsky acceleration of Apophis, and they show that the asteroid is drifting away from a purely gravitational orbit by about 170 meters per year, which is enough to keep the 2068 impact scenario in play."

In NASA's Sentry Risk Table, Gizmodo reports that there is a one in 150,000 chance of the asteroid hitting Earth in 48 years, but Tholen says that the odds are closer to one in 530,000, a figure that accounts for the Yarkovsky effect. Reportedly, when Apophis was first discovered, experts said there was a 2.7 percent chance of it hitting Earth in 2029, but data shows it will safely pass within 19,794 miles of Earth. It will be visible in the skies without a telescope as it is 340 meter. God of Chaos Asteroid Could Cause Doomsday by 2029! Here’s All the Potentially Hazardous ‘Threats’ of 2019 Which Earth Missed Narrowly.

According to NASA, even a close encounter could have an impact on Apophis. While it will only be 30,000 kilometres from the planet, Earth's gravitational field may have an impact on the way the asteroid spins causing a change on its surface.

(The above story first appeared on LatestLY on Oct 28, 2020 09:41 AM IST. For more news and updates on politics, world, sports, entertainment and lifestyle, log on to our website latestly.com).