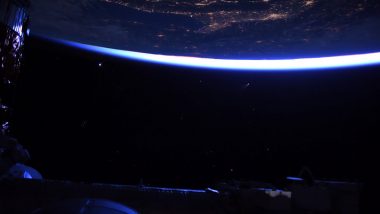 A comet named Neowise or C/2020 F3 is expected to be visible from Earth at various points throughout July. Astronauts and cosmonauts on the International Space Station were lucky to see the natural light recently. NASA astronaut Bob Behnken posted a tweet from the International Space Station on Sunday showing the comet shining brightly near the curve of Earth. He tweeted saying, "Last night's fireworks, for real. Because Science." In the photos, Comet Neowise is visible near the centre of the photographs. As the pictures went viral, people commented thanking him for sharing a picture of such a rare sight on social media. Asteroid Day 2020 Date, History and Significance: Everything to Know About the Day to Mark the Anniversary of the Siberian Tunguska.

Russian cosmonaut Ivan Vagner also took to Twitter sharing photo of Neowise. In the picture, the tail of the comet is clearly visible in the darkness around it. Netizens were amazed at how bright the comet looked. And it seems it is not just astronauts who are blessed with such rare sights but others too. A comet's tail is formed by the sun's radiation that pushes the dust out of the fuzzy blob surrounding the comet as the ice warms and turns to gas. On Monday, astrophotographer Kerry-Ann Lecky Hepburn shared a picture of the comet over Canada.

Comet NEOWISE and the city of Toronto, Ontario, Canada 🍁! I was up really early for this shot. It's not often that we get the opportunity to see or photograph a comet of this brightness and with a tail. I hope you like it!🤩 https://t.co/BFyxFFw2DE pic.twitter.com/sGZBiEVryM

To see Comet NEOWISE, you require binoculars and may not be able to see it in all its glory. The comet will, however, be present surrounding Earth throughout July. Vagner and Behnken will be in orbit have a close look at the comet. Behnken arrived aboard the first crewed SpaceX Crew Dragon on May 31 and will return to Earth with his NASA colleague Doug Hurley in August. Vagner and two other astronauts will remain in orbit until October.

(The above story first appeared on LatestLY on Jul 07, 2020 12:56 PM IST. For more news and updates on politics, world, sports, entertainment and lifestyle, log on to our website latestly.com).