What Happens After Murder Hornet Stings? Here's How to Treat The Painful Sting By Asian Giant Hornet, As Per Experts 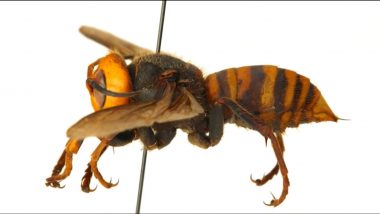 Amid the fears of Coronavirus spread around the world, another piece of news is creating a buzz, the murder hornets in the US. After a small number of sightings were confirmed in parts of the US, the panic set is amongst everyone, as these wasps are known to have a sting that can kill. The news is indeed unsettling, as people who have been stung by the wasp before have shared their experiences online and they are terrifying. Now experts have suggested a cure in case anyone gets stung by these insects. How to Identify Asian Giant Hornet? Know Everything About Murder Hornets 'With a Sting That Can Kill' Found in US.

A video of YouTuber Coyote Peterson, who demonstrated the pain felt after a murder hornet sting is also going viral on the internet. He is known for grading stings of such venomous insects and thus even tried out this lethal one. He survived but with a screeching pain and swollen hands just minutes after he was stung. It is said that several stings from these giant wasps can be lethal.

But a Nanaimo man was indeed lucky to have survived after being stung by these Asian giant hornets at least seven times! Local beekeepers John and Moufida Holubeshen eradicated the nest of these hornets using the help of entomologist Conrad Bérubé. John was stung by the hornet through his tee and stung him on the upper chest. And Bérubé was stung seven times, two of which went through two pairs of pants and got blood out. He experienced "throbbing muscular aches" in the legs for about 24 hours, he said to a local report. By now we know that the stings from these bees are dangerous, so how does one cure it?

How to Cure a Sting Of Murder Hornet?

It is important to note that these hornets will sting only if they are threatened. Several experts have suggested ways in which the sting can be looked after. As much as possible, stay away from their nests. In case of a sting, walk away from the area as soon as possible. Do not try and swat or go defensive with these wasps, it might trigger them more. “The best thing to do is to clear out of that area in general so that they don’t have any motives to sting you more,” says entomologist Roberto M. Pereira from the University of Florida to Prevention.com.

As per dermatologist Gary Goldenberg, M.D., assistant clinical professor of dermatology at the Icahn School of Medicine in New York, one must try and wash the wound with water and soap as soon as possible. After cleaning the wound, apply ice to keep the inflammation in check. He added that the swelling can last for almost a week. He recommends taking an ibuprofen to ease any soreness and itching. In case the area of the sting feels warm and gets red too much, it could be a sign of infection, in that case, one must approach a doctor soon.

With the dangers of these murder hornets rising, scientists are working on a plan to eradicate these wasps, as they prove a threat to the ecological system. Known to destroy bee hives in just a few hours, they highly threaten the bee population and in turn the honey industry. A campaign has been started by Washington State Department of Agriculture to enlist the public to report sightings of the species.

(The above story first appeared on LatestLY on May 06, 2020 01:24 PM IST. For more news and updates on politics, world, sports, entertainment and lifestyle, log on to our website latestly.com).