When Is Solar Eclipse 2022 in April? Know the Date, Time and Visibility of Year's First Surya Grahan in India and Other Places Around The World

The first Surya Grahan or Solar Eclipse of the year 2022 will occur on April 30, Saturday in parts of South and West-South America, Pacific Ocean, Atlantic and Antarctic Ocean. This solar eclipse will be the first of two partial solar eclipses in 2022, as the second will occur on October 25th, 2022. 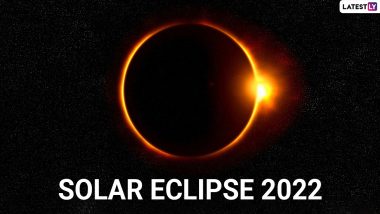 The year 2022 is going to be significant in terms of astronomical events. There will be two solar and two lunar eclipses this year and both of them are considered important in astrology. Moreover, as per the reports, the April 30 Solar eclipse will occur just four days before the moon reaches apogee which is its farthest point from the planet Earth. Interestingly, the natural phenomena in some ancient and modern cultures were attributed to supernatural causes or regarded as bad omens. There are in general four types of eclipses, out of them the month of April will witness the partial eclipse which occurs when the Sun and Moon are not exactly in line with the Earth and the Moon only partially obscures the Sun. Astronomical Events in 2022: From Total Lunar Eclipse in May to Partial Solar Eclipse in October, Check Full List of Celestial Event Calendar.

Looking at the forthcoming astronomical event, on the 30th of April parts of South and West-South America, Pacific Ocean, Atlantic and Antarctic Ocean will encounter the Solar Eclipse 2022. The Indian Standard Time (IST), for the surya grahan on Saturday will start at 12:15 pm and end at 4:07 pm. But the eclipse won't be visible in India. As per astrologers, in eighteen years, a total of forty-one solar eclipses take place, however, a maximum of five eclipses can happen in a year. This solar eclipse will be the first of two partial solar eclipses in 2022, as the second will occur on October 25th, 2022.

A surya grahan occurs when the sun, moon and earth are aligned in such a way that a portion of the Earth is engulfed in a shadow cast by the Moon which fully or partially blocks sunlight. The Solar eclipses hold a lot of belives when it comes to zodiac signs and health. The sutak rules will not be followed during the eclipse in the year 2022. Sutak rule is basically a period of abstention observed by the Hindus during birth, death, or eclipses. According to the belief, the sutak rules are followed only when there is a state of total eclipse. But all the eclipses this year are considered partial, due to which it will not be necessary to follow the sutak rules.

(The above story first appeared on LatestLY on Apr 18, 2022 01:36 PM IST. For more news and updates on politics, world, sports, entertainment and lifestyle, log on to our website latestly.com).