The successful installation aims to break new ground in monitoring and understanding of climate change. 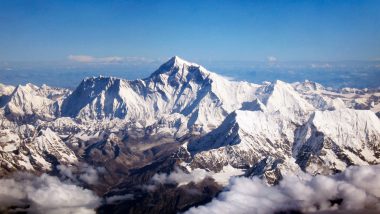 Kathmandu, June 14: The National Geographic Society has announced the successful installation of the worlds highest operating weather stations on Mount Everest to provide researchers, climbers, and the public with near real-time information about mountain conditions, the media reported. "The multi-disciplinary team installed the world's two highest operating automated weather stations at Balcony area (8,430 m) and South Col (7,945 m), as well as three other weather stations on Mount Everest," Fae Jencks, Director, Marketing and Communications at the National Geographic Society, said in a statement on Thursday.

The other stations were placed at Phortse (3,810 m), Everest Base Camp (5,315 m) and Camp II (6,464 m), the statement said, adding that each weather station will record data on temperature, relative humidity, barometric pressure, wind speed, and wind direction, reports The Himalayan Times. Data from the weather stations and other new research conducted as part of National Geographic and Rolex's Perpetual Planet Extreme Expedition to Everest will help communities respond to climate risks that threaten the lives and livelihoods of the more than one billion people in the region. China to Build Eco-Friendly Toilet at a Camp on Mount Everest.

The successful installation aims to break new ground in our monitoring and understanding of climate change as the stations will help continuously monitor the upper reaches of the atmosphere, which is critical to tracking and predicting weather patterns around the globe, the statement added. "The Balcony weather station is the first weather station installed at an elevation above 8,000 metres, meaning it will also be the first to sample the stratosphere as natural variations in the atmospheric boundaries change over time."

According to the statement, the multi-disciplinary team also collected the highest-ever ice core sample (at 8,020 metres), conducted comprehensive bio-diversity surveys at multiple elevations, completed the highest-elevation helicopter-based lidar scan, expanded the elevation records for high-dwelling species and documented the history of the mountain's glaciers.

With team members from eight countries, including 17 Nepali researchers, the expedition team conducted trailblazing research in five areas of science that are critical to understanding environmental changes and their impacts: biology, glaciology, meteorology, geology and mapping.

(The above story first appeared on LatestLY on Jun 14, 2019 01:32 PM IST. For more news and updates on politics, world, sports, entertainment and lifestyle, log on to our website latestly.com).