With the arrests of three people - two writers and an activist - in last one week under Digital Security Act (DSA) and the Information and Communication Technology Act (ICTA), international rights group Amnesty International opposed their arrests under 'draconian laws'. 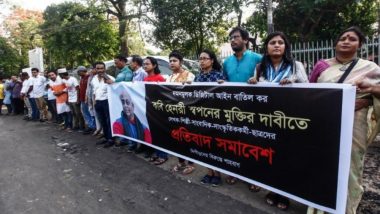 Dhaka, May 16: With the arrests of three people - two writers and an activist - in last one week under Digital Security Act (DSA) and the Information and Communication Technology Act (ICTA), people are concerned over the freedom of speech in Bangladesh.

A human rights defender, a poet and a lawyer have been arrested in Bangladesh under draconian laws that punish speech with heavy fines. We call on the authorities to respect people’s right to peaceful freedom of expression.

Among the arrested people include prominent poet Henry Sawpon (48) - living in the southern district of Barisal. He has been arrested under DSA on Tuesday for allegedly hurting the religious sentiments of Bangladesh's minority Christian community. He is currently on bail.

The second person who was arrested was writer Imtiaz Mahmud (61), as reported by Al Jazeera. The police arrested him under ICTA in the capital Dhaka on Wednesday over a Facebook post. He had written about the rights of minorities in the Chittagong Hill Tracts (CHT) region.

It is to be known that CHT - a semi-autonomous region within Muslim-majority Bangladesh - is under low-intensity conflict between its 13 ethnic minorities and the country's armed forces for decades. World Press Freedom Day 2019 History And Significance: All About The Day To Mark Free Press.

The last arrest that was made by the state's police was of rights activist Abdul Kaium under DSA on May 11. The arrest was made following a complaint by the principal of an Islamic school, accusing Kaium of'sharing improper content online'.

The recent arrests of writers by the South Asian nation have drawn criticism from activists and international rights groups, as fears of a crackdown on freedom of expression looms large. As per these two laws, not only there is a curb on free speech - mainly in the press - but also a provision of 14-years sentence waits for 'offenders'. Bangladesh Christian Poet Arrested over Writing on Priests

Protesters threatened to go on an indefinite strike beginning Friday. Even they have called for the abolition of the DSA and ICT, calling the two laws 'inhuman'.

(The above story first appeared on LatestLY on May 16, 2019 11:30 PM IST. For more news and updates on politics, world, sports, entertainment and lifestyle, log on to our website latestly.com).