Bangladesh Home Minister Asaduzzaman Khan Kamal has said that the government is moving to re-activate the investigation of 83 cases of Hefazat-e-Islam's terror activities in 2013. 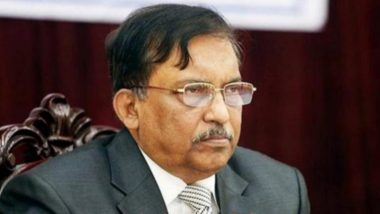 Dhaka, Dec 2: Bangladesh Home Minister Asaduzzaman Khan Kamal has said that the government is moving to re-activate the investigation of 83 cases of Hefazat-e-Islam's terror activities in 2013.

In an exclusive interview with IANS on Tuesday night the Home Minister said: "Terrorism cases cannot be postponed for so long. Details of the cases are being checked. The government is determined to take strict action against the accused."

Police have filed chargesheets in only 15 of the 83 cases in the May 5, 2013 violence at Shapla Chattar in Motijheel.

Analysts have blamed the Hasina-led government's compromise with Hefazat for slowing down the proceedings, but police said it is too late to file charges because no witnesses are available. Jamaat-e-Islam to Be Exposed as Leader of Hefazat-e-Islam in Bangladesh.

Replying about the delay, Kamal said: "Yes, 7 years have passed for various reasons, which is a big mistake. The cases are being brought to light this time and according to the chargesheet, the government will take action against those who committed terrorism in 2013.

"If there is any chance to compromise with this fanatic force, then the procedure to re-active the cases will be suppressed again."

In response to this question, the Home Minister said, "No, it will not be going to happen. Because the government has decided to take strict action against the terrorists."

Fanatics and anti-liberation forces leaders Junaid Babunagari and Mamunul Huq have announced that if a sculpture of Bangabandhu at Dholaipar in the capital is set up, it will be dragged down, which has led to controversies across the country.

There are sculptures in different Muslim countries, including Indonesia, Saudi Arabia, Iran, Jordan and Pakistan, but no one talks about the sculptures there.

"A sculpture is a symbol of a country's history, tradition and bright memories and liberation war. Sculptures are found in almost every country in the world," said the ruling party workers and cultural activists.

The opposition parties and other political forces are silent on this issue.

Progressives have vented anger on Hefazat-e-Islam Bangladesh Ameer Junaid Babunagari's statement that "if a sculpture of Bangabandhu is set up, it will be dragged down".

Islamic experts said that sculptures can be set up in the public interest. No one should think that a sculpture is a 'haram-halal' issue.

In seven districts, including the capital Dhaka, 83 cases were registered in 2013, alleging terrorism.

According to the police headquarters, out of 83 cases, two cases were registered in Kalabagan police station in Dhaka, one in Ramna, one in Sher-e-Bangla Nagar police station, six in Bagerhat and five in Narayanganj.

Seven years ago, in 2013, 64,096 people including Junaid Babunagari were convicted in 83 cases in five districts, including Dhaka. Of these, 53 cases were registered in the capital. Hefazat-e-Islam, Islami Oikyajot, Jamaat-e-Islami, Islami Chhatrashibir, Nezame Islam, Khilafat Majlish, Khilafat Andolan, Jamiat Ulamaye Islam, BNP and their young wing and students Juba Dal and Chhatra Dal central leaders and activists were accused in these cases.

Police have issued chargesheets in 15 cases. The accused in these cases have either been released on bail or have resumed their activities in public. Some of the accused did not even take bail.

Around 50,000 Hefazat activists and supporters took position at Shapla Chattar in Motijheel on May 5, 2013 after a blockade at six entrances to Dhaka. Earlier in the day, they clashed with police.

Top BNP leaders Moudud Ahmed, MK Anwar and Rafiqul Islam Mia were also arrested in connection with the May 5 killing of a policeman.

According to the report, the accused in the case are now trying to disrupt law and order by misleading the people by making provocative speeches and statements calling the sculpture of Bangabandhu an idol, said an official to IANS.

Hefazat-e-Islam Bangladesh, a Qaumi Madrasa-based organization, suddenly became pro-active in demanding 13 points, including punishment of so-called atheist bloggers, during the Ganajagaran Mancha movement in the capital's Shahbagh in February 2013, according to police headquarters.

Hundreds of shops and many government and private installations, vehicles were vandalized and set on fire in Motijheel, Paltan and surrounding areas. Hefazat leaders and activists dispersed in the face of a joint operation by police, RAB and BGB that night.

According to the Dhaka Metropolitan Police (DMP), out of 53 cases registered in the capital, four have been charged. The remaining 49 cases are under investigation.

After the incident on May 5, 2013, Junaid Babungari, the central leader of Hifazat, and Mufti Waqqas, the secretary general of Jamiat Ulama Islam, were remanded and interrogated. They blamed some central leaders of Hifazat, BNP, Jamaat-e-Islami, Jamiat-e-Ulamaye Islam, Nezame Islam, Khilafah Majlis, Khilafah Andolan, Islamic Unity and several other parties for the violence. One also testified in court under section 164.

Among the other cases outside Dhaka, six people were killed in a clash with police at Hathazari in Chattagram on May 8, the day after the incident in Dhaka. Hathazari police filed a case under the Murder and Explosives Act.

The accused are all local BNP leaders and activists and supporters of Hefazat. The investigation into this case is not over.

Two Hefazat workers were killed in a clash with police in Bagerhat on the same day and the next day over the incident in Dhaka. Police filed four cases in Fakirhat and two in Bagerhat Sadar Police Station.

A bus owner who was injured in the violent incident also filed another case. Chargesheets have already been filed in five cases. The investigation into the other two cases is not over yet. The cases have not been resolved in the last seven years after Hefazat-e-Islam launched its terror campaign.

Among the accused in the case are Junaid Babungari, Secretary General of Hifazat, Moinuddin Ruhi, President of Chittagong Metropolitan, Farid Ullah, Maulana Shamsul Alam, Mahibullah Babungari and others.

(The above story first appeared on LatestLY on Dec 02, 2020 02:23 PM IST. For more news and updates on politics, world, sports, entertainment and lifestyle, log on to our website latestly.com).