The Canadian government lowered flags at half-mast to commemorate the deaths of 215 Indigenous children whose remains were found in a former residential school in Kamloops city last week. 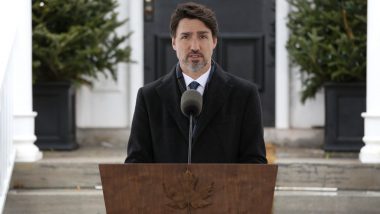 Ottawa, May 31: The Canadian government lowered flags at half-mast to commemorate the deaths of 215 Indigenous children whose remains were found in a former residential school in Kamloops city last week.

"To honour the 215 children whose lives were taken at the former Kamloops residential school and all Indigenous children who never made it home, the survivors, and their families, I have asked that the Peace Tower flag and flags on all federal buildings be flown at half-mast," Prime Minister Justin Trudeau tweeted on Sunday. World News | Canada: Bodies at Indigenous School Not Isolated Incident

Trudeau's order came a day after Stacey Laforme, chief of Mississaugas of the Credit First Nations (MCFN) in Ontario, issued an open letter to him, urging the government to lower the flags and declare a national day of mourning, reports Xinhua news agency.

"We call on the Prime Minister to lower flags of this country and declare a national day of mourning for our children," Laforme's open letter posted on Twitter said.

"These children were forcibly taken by the state. They died at a church-run residential school and were buried without dignity."

An online petition on Change.org has also been circulating, calling on the Trudeau government to establish a national day of mourning in honour of the children.

As of Sunday afternoon, it has amassed nearly 9,000 signatures.

On May 27, the Tk'emlups te Secwepemc First Nation in Kamloops city, British Columbia province, announced that a ground-penetrating radar uncovered the remains at the Kamloops Indian Residential School.

Among the victims, some were three years old.

The children were assumed to have been lost or runaway in Canada's residential school system.

The Canadian government took over the operation from the Catholic church to operate as a day school until it closed in 1978.

At one point, it was the largest in Canada's residential school system.

Canada's Truth and Reconciliation Commission issued its final report on residential schools in 2015.

The report detailed the harsh mistreatment inflicted on Indigenous children at the institutions, where at least 3,200 children died amid abuse and neglect.

(The above story first appeared on LatestLY on Jun 01, 2021 08:39 AM IST. For more news and updates on politics, world, sports, entertainment and lifestyle, log on to our website latestly.com).