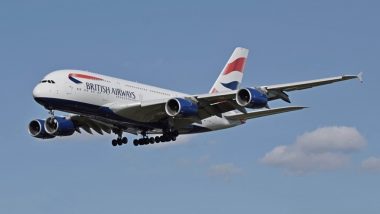 London, September 16: Amid the COVID-19 pandemic affecting the businesses worldwide, reports arrived on Wednesday that British Airways may cut as many as 10,000 jobs. The new development comes days after 7,200 people left the flagship UK carrier.

According to a report, published in the BloombergQuint, British Airways is in talks with few labour groups and rowing on a plan to fire and rehire staff on new contracts. Previously too, the BA had come under fire for parliamentarians and labour unions for its plans to cut around 12,000 workers. Virgin Atlantic to Operate UK-Pakistan Direct Flights from December.

That time House of Commons Transport Committee had accused British Airways -- which is part of International Airlines Group -- of using COVID-10 as an excuse to slash the payroll of workers. Meanwhile, BA is currently operating at about 35-40 per cent of its capacity, its Chief Executive Officer Alex Cruz had said.

Apart from this, another key development arrived that BA will begin a direct flight from Lahore to London for four days a week from October 14. The information was shared by the British High Commission in Islamabad on Tuesday.

The flights will operate from Heathrow Terminal 5 and will land into Lahore international airport. It is to be known that the airline already flies every single day from Islamabad. Also, BA is mulling to resume operations of flights between New York and London.

(The above story first appeared on LatestLY on Sep 16, 2020 06:16 PM IST. For more news and updates on politics, world, sports, entertainment and lifestyle, log on to our website latestly.com).