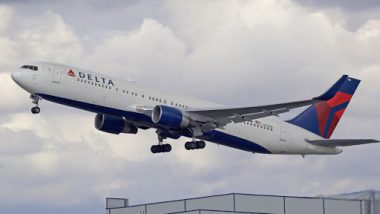 Washington, June 5: An unruly US passenger was arrested after he allegedly tried to breach the cockpit on a Delta Air Lines flight from Los Angeles to Nashville, said authorities Friday.

After the incident, the flight had to be diverted to Albuquerque, New Mexico. The aircraft landed without incident and the passenger was removed by law enforcement, according to Delta. Mexico: Huge Mystery Sinkhole Getting Bigger for Unknown Reasons in Santa Maria Zacatepec (Watch Video).

According to KABC-TV, an ABC owned-and-operated television station located in Los Angeles, a video taken aboard the plane shows the zip-tied and shoeless man surrounded by passengers and crew members as he repeated over and over again: "Stop this plane."

The man finally was picked up and hauled to the back of the plane. At the time of the incident, there were 162 passengers and six crew members on board. No one was injured during the incident, the television station reported.

(The above story first appeared on LatestLY on Jun 05, 2021 07:29 PM IST. For more news and updates on politics, world, sports, entertainment and lifestyle, log on to our website latestly.com).