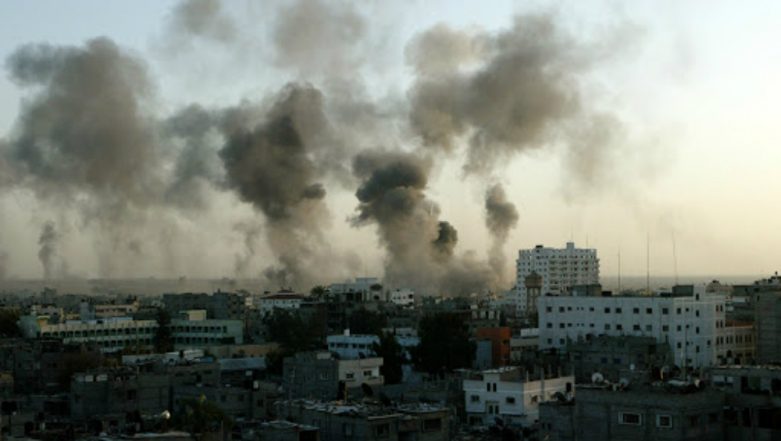 Jabaliya, March 13: An explosion struck the convoy of the Palestinian prime minister today as he was making a rare visit to Gaza, in what his Fatah party called an assassination attempt it blamed on Gaza militants. The explosion went off shortly after the convoy entered Gaza through the Erez crossing with Israel.

Palestinian Prime Minister Rami Hamdallah was unharmed and went on to inaugurate a long-awaited sewage plant project in the northern part of the strip. But Fatah quickly held Gaza's Islamic Hamas rulers responsible for the "cowardly attack" on the convoy, further escalating tensions between the bitter rival factions. Three of the vehicles in Hamdallah's convoy were damaged, their windows were blown out. One had signs of blood on the door.

Hamdallah, who is based in the West Bank, arrived in Hamas-run Gaza to inaugurate the sewage plant and said there that the attack will "not deter from seeking to end the bitter split. We will still come to Gaza." The rival factions have been trying to reconcile since 2007 when Hamas seized control of Gaza from Fatah forces and have suffered several setbacks in their efforts since. The takeover left the Palestinians with two rival governments, Hamas in Gaza and the Western-backed Palestinian Authority governing autonomous enclaves in the Israeli-occupied West Bank.

In November, Hamas handed over control of Gaza's border crossings to the Palestinian Authority. It was the first tangible concession in years of Egyptian-brokered reconciliation talks. But negotiations have bogged down since then. Hamdallah's visit comes amid a time of crisis in Gaza. Today, the White House is hosting a special meeting to discuss Gaza's devastated economy.

The plant in question was envisioned in 2007 after overburdened sewage reservoirs collapsed, killing five villagers. The World Bank, European Union and other European governments have paid nearly USD 75 million in funding. Hamas' takeover of Gaza from the Palestinian Authority in 2007 and the ensuing Israeli-Egyptian blockade, power shortages and conflicts delayed the opening of the project for four years. Besides the old reservoirs, the plant will receive wastewater from four towns and villages. After treatment, the water will be transferred for irrigation and the remainder will be safely dumped to the sea.