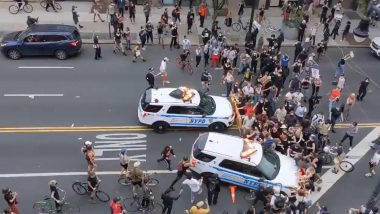 New York, May 31: Amid raging protests across the United States over the death of African-American man George Floyd in police custody, videos have emerged showing New York Police Department SUVs ramming down protesters and flinging them in the air. The disturbing incident allegedly took place at the intersection of Flatbush Ave. and St. Mark's St. just three blocks southeast of the Barclay's Center on Saturday. Protests over George Floyd's Death Intensify Across US, National Guard Called by 6 States.

The videos showed a group of protesters surrounding an NYPD cruiser and holding a barrier in front of it. They can be seen throwing what appeared to be water bottles and garbage at the vehicle. A second NYPD cruiser arrives. Suddenly, both cars begin slowly driving into the crowd. The first cruiser then suddenly rams down the barricade, flinging protesters in the air. Screams could be heard over the top of the police sirens. Coco Gauff Joins Protests Over Death of George Floyd in Police Custody, Asks ‘Am I Next’ in Video Listing People of Colour Killed.

NYPD officers just drove an SUV into a crowd of human beings. They could‘ve killed them, &we don’t know how many they injured.

NO ONE gets to slam an SUV through a crowd of human beings.@NYCMayor these officers need to be brought to justice, not dismissed w/“internal reviews.” https://t.co/oIaBShSC1S

Soon videos of the incident went viral on social media, drawing condemnation. Democratic Congresswoman Alexandria Ocasio-Cortez, who represents New York's 14th congressional district, urged Mayor Bill de Blasio to bring the officers involved to justice. "NYPD officers just drove an SUV into a crowd of human beings. They could've killed them, &we don't know how many they injured. NO ONE gets to slam an SUV through a crowd of human beings," Ocasio-Cortez tweeted.

Demonstrations and riots have spread to cities across the United States after a video went viral of George Floyd being suffocated to death by a white police officer in the mid-western US state of Minnesota on Monday.

(The above story first appeared on LatestLY on May 31, 2020 09:40 AM IST. For more news and updates on politics, world, sports, entertainment and lifestyle, log on to our website latestly.com).