Iran Military Claims to Have Shot Down US Drone, Tension Likely to Escalate

With the tension between Iran and the USA growing in recent times, Iran's military had said that it has shot down an American drone that was flying over Hormuzgan province. 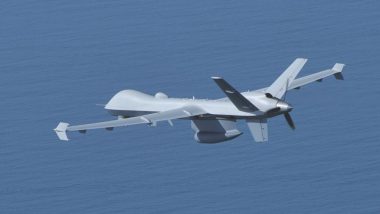 Tehran, June 20: With the tension between Iran and United States of America growing in the recent times, Iran's military had said that it has shot down an American drone that was flying over Hormuzgan province. Though no confirmation has been made from the US side, if the reports are true then the relationship between two nation would further deteriorate.

Reporting about the news, The Spectator Index tweeted, "Iran's military says it has shot down an American drone that was flying over Hormuzgan province in Iran." Iran Not to Extend 60-Day Nuclear Deal Deadline

It is to be known that Trump officials on Wednesday had told the Congress that Iran has ties with terror organisation Al Qaeda, which had prompted sceptical reactions and concerns on Capital Hill. US Secretary of State Mike Pompeo had even backed his claims by stating that the pattern which Iran is using currently is the same as it was used prior to the terror attack in the US on September 11, 2001.

On the other side, Iran had stated on Wednesday that it will not extend the 60-day deadline for the parties to the 2015 nuclear deal to take practical measures to save Tehran's interests. The information was shared by the country's atomic energy agency said on Wednesday.

(The above story first appeared on LatestLY on Jun 20, 2019 09:06 AM IST. For more news and updates on politics, world, sports, entertainment and lifestyle, log on to our website latestly.com).