Iran will not extend the 60-day deadline for the parties to the 2015 nuclear deal to take practical measures to save Tehran's interests, the country's atomic energy agency said on Wednesday. 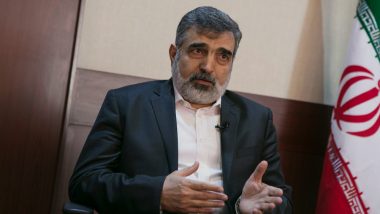 Tehran, June 19: Iran will not extend the 60-day deadline for the parties to the 2015 nuclear deal to take practical measures to save Tehran's interests, the country's atomic energy agency said on Wednesday.

"Iran's two-month deadline for the remaining parties of the Joint Comprehensive Plan of Action (the nuclear deal) cannot be extended," Atomic Energy Organization of Iran (AEOI) spokesman Behrouz Kamalvandi was quoted as saying by the state TV.

On May 8, Tehran stopped complying with parts of the nuclear agreement -- the Joint Comprehensive Plan of Action (JCPOA) -- after the US unilaterally withdrew from the deal in 2018 and reimposed sanctions on Tehran.

Iran said that it would start enriching uranium at a higher level, unless world powers protected its economy from Washington's sanctions within 60 days.

"We are taking measures in a consecutive and interconnected manner and there are no conditions to go backward," the spokesman added.

At the same time, Iranian President Hassan Rouhani on Wednesday urged normalization of economic relations between Tehran and other countries. "The spirit of the Iranian nuclear agreement in 2015 was restoration of decent economic relationship between Iran and the world," Rouhani was quoted as saying by Press TV.

Washington had also threatened to impose the secondary sanctions on countries and entities which continue trading with Iran, particularly in energy sector.

Rouhani said Iran was entitled to suspend some of its commitments under the deal, adding that the country's move was "the smallest possible reaction to the 'breaches' committed by the US in relation to the nuclear deal".

(The above story first appeared on LatestLY on Jun 19, 2019 09:36 PM IST. For more news and updates on politics, world, sports, entertainment and lifestyle, log on to our website latestly.com).