Israel will temporarily reopen Gaza's main cargo crossing Kerem Shalom on Tuesday to allow the transfer of the humanitarian aid of gas, food and medicine to the besieged Palestinian enclave where intense fighting continued for an eight straight day. 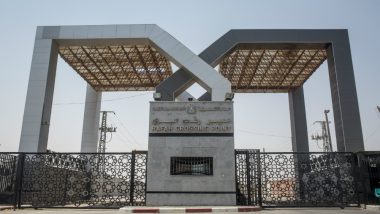 The crossing will be reopened for a few hours to transfer the humanitarian aid to the UN Relief and Works Agency for Palestine Refugees in the Gaza Strip, an Israeli government spokesperson told Xinhua news agency.

The announcement came amid a deadly escalation between Israelis and Palestinians in the Gaza Strip and the West Bank.

At least 208 people have been killed and some 1,500 others injured in the escalation since it erupted on May 10.

(The above story first appeared on LatestLY on May 18, 2021 01:50 PM IST. For more news and updates on politics, world, sports, entertainment and lifestyle, log on to our website latestly.com).