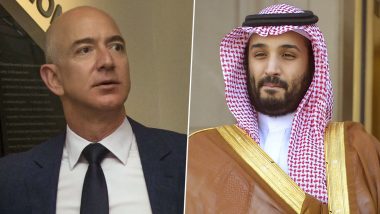 The report, however, did not shed light on what data was stolen from Bezos's mobile phone. The hacking of Bezos's mobile phone is reportedly related to Amazon chief's intimate text messages and photos to television anchor Lauren Sanchez, which wrecked his 25-year-old marriage with MacKenzie. The National Enquirer published multiple reports revealing Bezos's extramarital affair with Sanchez.

Subsequently, Bezos hired Gavin de Becker & Associates to find out how his intimate text messages and photos made their way into the hands of the Enquirer. Last year, Gavin de Becker said that their investigation concluded that Saudi Arabian authorities had hacked the Amazon chief's phone to access his personal data. In an article posted on the news site The Daily Beast, he said that the brother of Bezos's mistress was also paid for the release of Bezos's personal information.

de Becker linked the hack to extensive coverage by The Washington Post newspaper, which is owned by Bezos, of the murder of Saudi journalist Jamal Khashoggi. "It's clear that MBS considers The Washington Post to be a major enemy," de Becker wrote, referring to Mohammed bin Salman, whom the US Senate, after a closed-door briefing by the CIA, named as "responsible" for the murder.

(The above story first appeared on LatestLY on Jan 22, 2020 09:45 AM IST. For more news and updates on politics, world, sports, entertainment and lifestyle, log on to our website latestly.com).