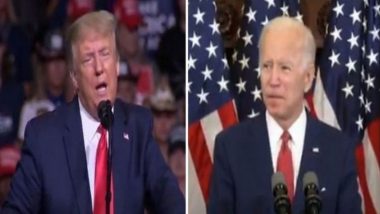 Washington, August 6: Former US President and presumptive Democratic nominee for the upcoming presidential election, Joe Biden, has drawn a parallel between African Americans and the Latino community, adding that the latter is more diverse than the former. Joe Biden made the remark while addressing the National Association of Black Journalists (NABJ) and National Association of Hispanic Journalists (NAHJ) Joint Virtual Convention. US Presidential Election 2020: Joe Biden is ‘Helpless Puppet' of Radical Left, Says Donald Trump.

Asked whether he would attempt to restore the Obama administration’s policy of improving relations with communist Cuba, Biden responded: "Yes." He then went on to add: "And by the way, what you all know, but most people don’t know, unlike the African American community, with notable exceptions, the Latino community is an incredibly diverse community, with incredibly different attitudes about different things … it’s a very diverse community." US Presidential Elections 2020: Team Joe Biden to Buy $280 Million Ads, Nearly Twice the Amount Reserved by Donald Trump's Campaigners.

Biden tried to explain his point by saying that Latinos in Florida and Arizona had different views on immigration. His remarks, however, did not go well with US President Donald Trump who said the Democratic leader had "insulted" the black community. Joe Biden, this morning, totally disparaged and insulted the black community... I don't know what is going on with him. But, it was a very insulting statement... It was a great insult to the black community," President Trump told reporters.

Donald Trump Hits Out at Joe Biden Over His Controversial Remark on Black Community:

Trump, 74, is pitted against Biden, 77, in the November 3 presidential election. As per the opinion polls conducted last month, he was trailing behind Biden on an average by eight percentage points.

(The above story first appeared on LatestLY on Aug 06, 2020 11:33 PM IST. For more news and updates on politics, world, sports, entertainment and lifestyle, log on to our website latestly.com).