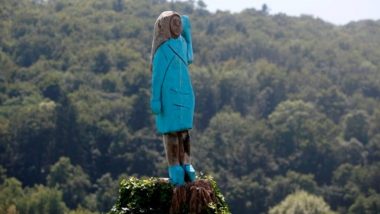 Downey said that he wants to the reason behind why people torched the wooden sculpture of Melania Trump. According to him, the statue was installed with an aim to foster a dialogue about the political situation in the United States. Also, the statue highlighted Melania Trump's status as an immigrant married to a US president, adds Downey. F-1, M-1 Nonimmigrant Visa Row: Donald Trump Admin Announces Plan to Make Temporary Modifications in Guidelines After Facing Global Backlash.

The Berlin-based American artist has filed a police complaint and expressed his desire to interview the culprits. Police spokeswoman Alenka Drenik told Reuters, "The investigation in this case has not been completed yet so we cannot reveal details due to the interest of further procedures."

Meanwhile, the office of Melania Trump has not made a comment on the issue. Melania Trump's wooden statue was carved with a chainsaw by local folk artist Ales Zupevc from the trunk of a living linden tree. Earlier in January 2020, a large wooden statue resembling Donald Trump was burnt in Slovenia's city of Moravce.

(The above story first appeared on LatestLY on Jul 09, 2020 09:34 AM IST. For more news and updates on politics, world, sports, entertainment and lifestyle, log on to our website latestly.com).