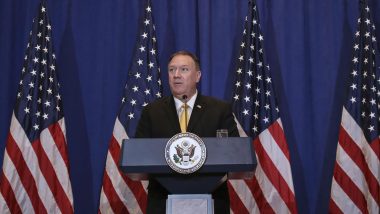 Washington, July 1:  US Secretary of State Mike Pompeo on Wednesday lauded India's decision to ban Chinese mobile applications. He said that this move will boost India's sovereignty, integrity and national security. India on Monday banned 59 Chinese apps, including TikTok, UC Browser and Helo, citing they were prejudicial to sovereignty, integrity and security of the country.

India's decision has been widely noted in the United States, with some prominent lawmakers urging the Donald Trump, government to follow the similar suit as it is widely believed that some Chinese apps are security risks. TikTok, UC Browser Among 59 Chinese Apps Banned by Govt of India Amid Row With China, See Full List.

Republican Congressman Rick Crawford has tweeted that "TikTok must go and it should have been gone yesterday." While, Republican Senator John Cornyn said, "India bans TikTok and dozens of other Chinese apps in the wake of deadly clash."

Earlier, US National Security Advisor (NSA) Robert O'Brien had said that TikTok is used by the Chinese Government for its own purposes. "On TikTok, a Chinese-owned social media platform with over 40 million American users, probably a lot of your kids, and younger colleagues, accounts criticising the CCP (Chinese Communist Party) and Beijing's policies are routinely removed or deleted," O'Brien said.

At least two bills are pending in the United States Congress to ban federal government personnel from using short-video sharing application TikTok on their mobile phones, reflecting such a sentiment can gain momentum in the US after India's decision.

(The above story first appeared on LatestLY on Jul 01, 2020 08:54 PM IST. For more news and updates on politics, world, sports, entertainment and lifestyle, log on to our website latestly.com).