The Moroccan police has arrested three Iranians and four Bulgarians for their alleged links with an international human-trafficking ring, media reports said. 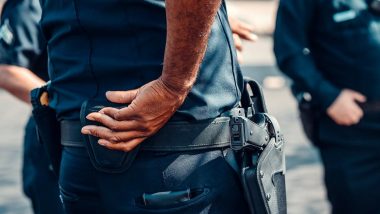 The three Iranians were arrested at Casablanca Mohammed V Airport when attempting to board a plane to Spain using false travel documents, the police said in a statement on Wednesday, Xinhua news agency reported, citing the official news agency MAP.

The arrest of the four Bulgarians was made later for their alleged involvement in planning and facilitating the illegal immigration attempt, it added. Anti-Human Trafficking Unit of Delhi Police Busted Sex Racket Operating From Spa Centre, 11 Women Arrested.

Several forged travel documents, boarding passes and cell phones with international SIM cards were seized by police officers, according to the statement.

The suspects, aged between 28 and 68, were taken into custody for questioning by the Moroccan authorities responsible for fighting illegal immigration, the statement noted.

(The above story first appeared on LatestLY on Apr 14, 2022 04:10 PM IST. For more news and updates on politics, world, sports, entertainment and lifestyle, log on to our website latestly.com).