Polar Vortex 2019: Here’s How -50 Degrees Feels Like in Chicago and Other Cities in the US; See Pics & Videos

The temperatures in the United States are bone-chilling, and we cannot imagine what the residents at the moment are experiencing. 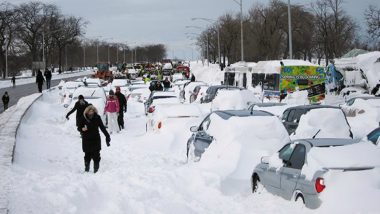 Freezing Cold in the US Due to Polar Vortex (Photo Credits: @WednesdayComix/ Twitter)

It is bitterly cold in many parts of the United States as a polar vortex has forced the temperatures to drop further down in North America than usual. Weather reports suggest that temperatures in parts of the Midwest are lower than that in Antarctica and the wind chill has made it even worse. Chicago is shivering through its coldest temperatures and just endured its snowiest stretch of days in more than three decades. The northern Illinois city of Chicago has recorded an all-time-low temperature of -28 degree Celsius. The windy city is now everywhere in the news and weather panels claim that the chill brought by the polar vortex in the United States will give the people a -51 degree-like feel.

What is a Polar Vortex?

A polar vortex is an upper-level low-pressure area that lies near the Earth’s poles. It is a large pocket of biting air, typically the coldest air in the Northern Hemisphere, which sits over the polar region during the winter season. The freezing wind finds its way to the United States when the polar vortex is pushed farther south, occasionally reaching Southern Canada and the Northern Plains, Midwest and North-eastern portions of the United States. The vortex is even capable of delivering sub-zero temperatures to the US and Canada for several days at a time. U.S. Braces for Extreme Cold Weather, Chicago to be Colder than Antarctica.

It’s feels like -50 in my hometown of Plymouth, Minnesota right now 🥶 #polarvortex2019 pic.twitter.com/qUjZ0li0lS

The temperatures in the United States are bone-chilling, and we cannot imagine what the residents at the moment are experiencing. It is too cold! Experts suggest the pets like dog and cat should not step outside the house as they might die because of the unbearable cold weather. Twitter is filled with images of how the -50-degree weather feels like.

Wicked wind off Lake Michigan this morning. 45 below wind chill. I could only stand out here for 30 seconds. Epic cold! pic.twitter.com/kicGbSZWhM

Nah, Nothing is Really Working Out

According to reports, the last time when Chicago weather recorded an all-time plunge dates back to January 20, 1985, when the temperature in the city fell 27 degrees below zero.

Coldest Days Ever in Chicago

At present, Chicago is facing dangerously cold temperatures, which are expected to continue till the evening of January 31. Hence, a Wind Chill Warning is in effect. A Wind Chill Warning means the combination of icy air and the wind will create hazardously low wind chill values. City officials have deployed warming buses to help keep the homeless out of the cold and also added 500 beds to its shelter so that everyone stays safe from the extreme cold.

(The above story first appeared on LatestLY on Jan 31, 2019 11:17 AM IST. For more news and updates on politics, world, sports, entertainment and lifestyle, log on to our website latestly.com).