The statement from the Saudi Foreign Minister comes at a time when Pakistan Prime Minister Imran Khan is visiting Saudi Arabia. Saudi Arabia Foreign Minister Prince Faisal bin Farhan Al Saud praised India and Pakistan for re-enforcing the ceasefire along the Line of Control (LoC), terming the move as an 'excellent step in the right direction'. 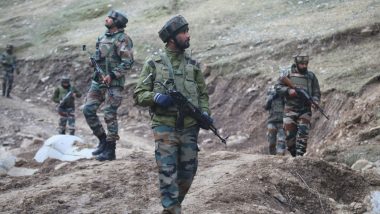 Islamabad, May 10: The Foreign Minister of Saudi Arabia has said that his country could play an important role in reducing tensions between the two nuclear-powered arch-rivals India and Pakistan. Saudi Arabia Foreign Minister Prince Faisal bin Farhan Al Saud praised India and Pakistan for re-enforcing the ceasefire along the Line of Control (LoC), terming the move as an 'excellent step in the right direction. It is pertinent to mention that the UAE Ambassador to Washington, Yousef Al Otaiba, had recently confirmed his country's role in de-escalating tensions between India and Pakistan. 'Ceasefire would hopefully lead to restoring diplomats and getting the relationship back to a healthy level,' said Otaiba. As the UAE is a close ally of Saudi Arabia, Riyadh's offer for intervention may prove fruitful in further melting down tensions between the two neighboring countries.

The statement from the Saudi Foreign Minister comes at a time when Pakistan Prime Minister Imran Khan is visiting Saudi Arabia. Prince Faisal has termed the visit of the Pakistani Premier as an extremely important one in the history of bilateral relations. 'The visit of Imran Khan is extremely important in the history of brotherly relations. We have an excellent visit of the prime minister and many, many subjects have been covered,' he said. It seems that the backdoor channels, activated by Washington and routed through the Arab countries like the UAE and now Saudi Arabia, have been designated to ensure that matters of concern between India and Pakistan are deliberated and discussed to seek a workable solution. Saudi Arabia to Hold Haj This Year Under COVID-19 Safety Measures.

Pakistan and India both have maintained rigid positions officially, with Islamabad putting the Kashmir dispute first with the demand of reversal of the unilateral decision taken by the Narendra Modi government to revoke Articles 370 and 35A, thus changing the special status of the erstwhile state of Jammu and Kashmir and bifurcating it into two Union territories – J&K and Ladakh.

India, on the other hand, has maintained that cross-border terrorism is its prime agenda if any talks are to happen between the two countries through official channels. India has also maintained that its decision on Jammu and Kashmir is its internal matter and has refused to discuss it on any platform. These are the reasons why backdoor channels are being activated as both countries have serious political complications and obligations, which do not allow them to take any forward movement with an open-minded approach towards each other. But the prime question pertaining to Indo-Pak relations with reference to deliberations through backdoor channels is how both governments will implement major decisions officially.

(The above story first appeared on LatestLY on May 10, 2021 06:12 PM IST. For more news and updates on politics, world, sports, entertainment and lifestyle, log on to our website latestly.com).