Seven Rhinos Die After Move to a New Park in Kenya

Seven out of 14 critically endangered black rhinos died after being moved to a new reserve in southern Kenya, wildlife officials admitted today. 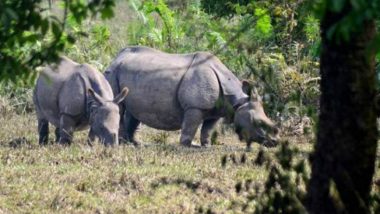 Kenya Wildlife Service (KWS) has refused to comment on the rhinoceros deaths but, speaking on condition of anonymity, one official said, "Seven of the rhinos died but it has not been established as to why."

A second KWS officer also confirmed the deaths but said an investigation had to be carried out before the information was made public. The relocation of endangered animals -- known as translocation -- involves putting them to sleep for the journey and then reviving them in a process which carries risks.

But the loss of half of them is highly unusual.

The black rhinos were moved from Nairobi and Lake Nakuru national parks to Tsavo East last month in an operation trumpeted by Tourism Minister Najib Balala. He has yet to comment on the tragic outcome.

Prominent Kenyan conservationist Paula Kahumbu said officials must take responsibility and explain what went wrong. "Rhinos have died, we have to say it openly when it happens, not a week later or a month later," she said.

"Something must have gone wrong, and we want to know what it is." Save the Rhinos estimates there are fewer than 5,500 black rhinos in the world, all of them in Africa, while Kenya's black rhino population stands at 750, according to the Worldwide Fund for Nature.

According to KWS figures, nine rhinos were killed in Kenya last year. In May, three more were shot dead inside a specially-protected sanctuary in northern Kenya and their horns removed, while in March the last male northern white rhino on earth, an elderly bull named Sudan, was put down by Kenyan vets after falling ill.