Philippine authorities on Thursday raised the alert level for Taal volcano, located near capital Manila, to 3 on a scale of 5 after it showed "magmatic unrest". 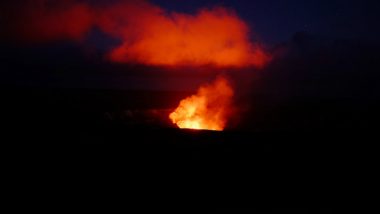 Manila, July 1: Philippine authorities on Thursday raised the alert level for Taal volcano, located near capital Manila, to 3 on a scale of 5 after it showed "magmatic unrest".

"At 3.16 p.m., the Taal volcano's main crater generated a short-lived dark phreatomagmatic plume 1 km-high with no accompanying volcanic earthquake," the Philippine Institute of Volcanology and Seismology said in a statement.

The institute said it decided to raise the alert level from 2 to 3 after the plume emission, reports Xinhua news agency. Iceland's Fagradalsfjall Volcano Erupts After 800 Years! Viral Drone Footage Incredibly Resembles Mordor From 'The Lord of the Rings'.

"This means that there is a magmatic intrusion at the main crater that may further drive succeeding eruptions," it said.

The institute urged the villagers on the island volcano and in high-risk surrounding villages to evacuate "due to the possible hazards of pyroclastic density currents and volcanic tsunami".

The institute further urged the villagers living around the Taal lakeshore to take precautionary measures and be vigilant, reminding them that the island is a permanent danger zone.

Taal volcano, one of the most active volcanoes in the Philippines, last erupted in January 2020.

The last eruption displaced nearly 380,000 villagers and destroyed many farms, houses and roads in the province.

(The above story first appeared on LatestLY on Jul 01, 2021 05:02 PM IST. For more news and updates on politics, world, sports, entertainment and lifestyle, log on to our website latestly.com).