UN Secretary-General Antonio Guterres has called for an immediate end to the ongoing fighting between the Palestinians and Israelis in the Gaza Strip, the worst since 2014. 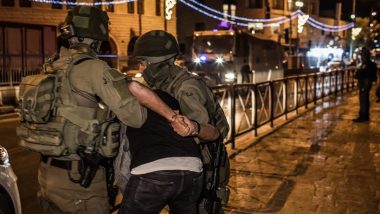 United Nations, May 17: UN Secretary-General Antonio Guterres has called for an immediate end to the ongoing fighting between the Palestinians and Israelis in the Gaza Strip, the worst since 2014.

"Fighting must stop. It must stop immediately. Rockets and mortars on one side and aerial and artillery bombardments on the other must stop. I appeal to all parties to heed this call," Guterres told a Security Council meeting on Sunday.  World News | UN Chief Says Israel, Gaza Fighting 'utterly Appalling', Calls for Immediate Ceasefire

"I am appalled by the increasingly large numbers of Palestinian civilian casualties, including many women and children, from Israeli strikes in Gaza. I also deplore Israeli fatalities from rockets launched from Gaza," he said.

The fighting risks dragging Palestinians and Israelis into a spiral of violence with devastating consequences for both communities and for the entire region, he said.

Guterres also warned that the fighting has the potential to unleash an uncontainable security and humanitarian crisis and to further foster extremism, potentially creating a new locus of dangerous instability.

The UN remains deeply committed to working with Palestinians and Israelis and with international and regional partners, including the Middle East Quartet, to realise a lasting and just peace, he said, calling on the parties to allow mediation efforts to intensify and succeed.

"The only way forward is to return to negotiations with the goal of a two-state solution, with two states living side-by-side in peace, security and mutual recognition, with Jerusalem as the capital of both states, based on relevant UN resolutions, international law and prior agreements," Guterres added.

Tensions between Israel and the Islamic Hamas movement have continued unabated in the Gaza Strip with no sign of any ceasefire between the two sides to end the violence.

According to the Health Ministry in Gaza, about 145 Palestinians have been killed and 1,100 injured since fighting escalated on May 10.

According to Israel's Magen David Adom rescue service, 10 people were killed and 636 injured in the Jewish state as a result of the rocket fire.

More than 2,300 have been fired by the Hamas, according to Israel's Army, although about 20 per cent go down over Gaza without reaching Israeli territory.

Israel has responded with airstrikes and artillery shelling, striking more than 650 targets.

(The above story first appeared on LatestLY on May 17, 2021 11:04 AM IST. For more news and updates on politics, world, sports, entertainment and lifestyle, log on to our website latestly.com).