US President Joe Biden has issued a proclamation ordering flags to be flown at half-staff to honour the eight victims of the Atlanta massage parlour shootings. 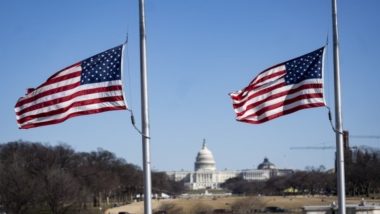 Washington, March 19: US President Joe Biden has issued a proclamation ordering flags to be flown at half-staff to honour the eight victims of the Atlanta massage parlour shootings.

According to the proclamation issued on Thursday, flags will be flown at half-staff at the White House and other federal buildings and on military bases, as well as embassies and other facilities abroad, until sunset on March 22 "as a mark of respect for the victims of the senseless acts of violence perpetrated on March 16, 2021, in the Atlanta Metropolitan area", Xinhua news agency reported. US Spa Shooting: Eight Dead in Attack at 3 Massage Parlours in Atlanta and Georgia, Suspect Held.

Biden also altered the agenda of his pre-scheduled trip with Vice President Kamala Harris to Atlanta on Friday, postponing an "evening political event" and meeting instead with "Asian-American leaders to discuss the ongoing attacks and threats against the community", the White House said in a statement.

The trip was initially designed to rally for the $1.9 trillion coronavirus relief bill Biden recently signed into law.

Eight people, six of whom were Asian and two were white, were killed in three shooting incidents in the Atlanta area by a suspect identified as 21-year-old Robert Aaron Long.

He has been arrested and charged with eight counts of murder and one count of aggravated assault.

Long claimed that the attacks were not racially motivated, and that he had a "sexual addiction" and saw the massage parlours as a "temptation" that he wanted to "eliminate", according to authorities.

When caught, he was on the way to Florida, where he planned to commit similar crimes, the authorities added.

The carnage added to the already high tensions around violence and discrimination targeting the Asian American community during the coronavirus pandemic.

Long's court appearance, originally scheduled for Thursday, was cancelled at the request of the defendant's attorney.

(The above story first appeared on LatestLY on Mar 19, 2021 09:20 AM IST. For more news and updates on politics, world, sports, entertainment and lifestyle, log on to our website latestly.com).