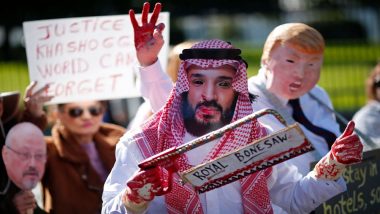 CIA Director Gina Haspel gave a classified briefing to US Senators on her intelligence department’s conclusions into the killing of Saudi journalist Jamal Khashoggi in Turkey. After leaving the briefing with the CIA chief, US Senators – Republican and Democrat have  said that there was “zero chance” that Saudi Crown Prince Mohammed bin Salman wasn’t involved in the murder of the political columnist.

GOP Senator Bob Corker of Tennessee said that the prince "ordered, monitored, the killing" of Khashoggi. "If he were in front of a jury, he would be convicted of murder in about 30 minutes," Corker said. He added, “There is no way anyone with a straight face could say they didn’t know what happened,” he said.

The Republican Senator, Chairman of the Senate's Committee on Foreign Relations said, “The US must send a clear and unequivocal message that such actions are not acceptable in the world's stage".

The comments come after Gina Haspel briefed top Republicans and Democrats on the Senate Armed Services, Foreign Relations, Appropriations and Intelligence committees. The briefing to Senators comes after multiple delays as reports of CIA's conclusion on Khashoggi's killing had been published almost a fortnight ago.

The Senate is due to vote in the coming days on a bill that would cut off US military support for Saudi military operations in Yemen. The senators have said they are even more convinced of their decision to ensure legislation that rebukes the Saudi Crown Prince and restrict US’s contribution in the Yemen war after the classified briefing, which detailed intelligence linking the Saudi leader to the murder of the US-based journalist.

"Somebody should be punished," said Senate Appropriations Chairman Richard Shelby, a Republican from Alabama. "Now, the question is how do you separate the Saudi crown prince and his group from the nation itself? That might be the real policy question."

The reaction of the US Senators is a far cry from what US President Donald Trump and his top cabinet members have shown ever since news broke of Jamal Khashoggi’s death. Trump and US Secretary of State Mike Pompeo have both said there is no conclusive proof that links the killing of Khashoggi to the Saudi Crown Prince.

(The above story first appeared on LatestLY on Dec 05, 2018 07:00 AM IST. For more news and updates on politics, world, sports, entertainment and lifestyle, log on to our website latestly.com).