A Thursday: Yami Gautam Wraps Up Shoot of Upcoming Thriller Film; Shares Video of Her Moments From the Sets

On Thursday, Yami took to her Instagram account to bid adieu to the team of her upcoming project. 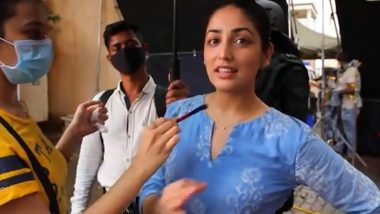 Actor Yami Gautam has finished shooting for her thriller movie A Thursday. On Thursday, Yami took to her Instagram account to bid adieu to the team of her upcoming project. "It's never a me... it's always a WE , with the best of teams.Bidding adieu to the most beautiful team and taking some fond memories with me from the sets of #AThursday," she wrote. Along with the short heartfelt note, Yami posted a clip featuring her BTS moments from the sets of 'A Thursday'. Lost: Yami Gautam’s Investigative Drama Goes on Floor (View Post).

For the unversed, 'A Thursday' revolves around a playschool teacher named Naina Jaiswal (played by Yami), who takes 16 toddlers as hostages. Actors Dimple Kapadia, Neha Dhupia and Atul Kulkarni are also a part of Behzad Khambata's directorial film. Most probably, 'A Thursday', which is produced by RSVP and Blue Monkey Films, will get a digital release. Lost: Yami Gautam, Pankaj Kapur, Rahul Khanna Roped In for Aniruddha Roy Chowdhury’s Next!

Apart from 'A Thursday', Yami will also be seen in 'Bhoot Police', 'Lost' and 'Dasvi'.