According to The Hollywood Reporter, actors Pete Davidson and Myhala Herrold are also in negotiations to join the film's cast. 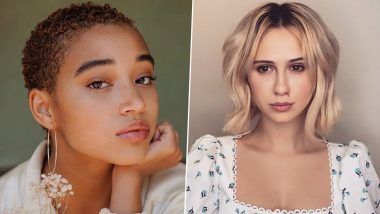 Actor Amandla Stenberg and Borat 2 breakout Maria Bakalova are set to lead the upcoming slasher movie Bodies, Bodies, Bodies for studio A24. According to The Hollywood Reporter, actors Pete Davidson and Myha'la Herrold are also in negotiations to join the film's cast. Dutch actor Halina Reijn, who made her feature directorial debut with the 2019 movie "Instinct", will helm the project for A24. Hunters Season 2: Jennifer Jason Leigh To Star in Amazon Prime Video’s Hit Series.

The details of the film's plot have been kept under wraps currently.

Bakalova broke out after playing the role of Sacha Baron Cohen's daughter in "Borat Subsequent Moviefilm", which earned her an Oscar nomination. She recently joined the cast of filmmaker Judd Apatow's upcoming movie "The Bubble".