Andy Murray, Serena Williams to Pair Up for Mixed Doubles at Wimbledon 2019 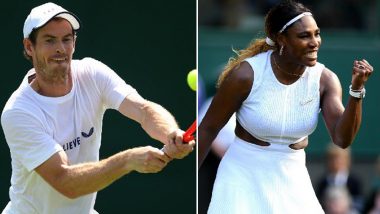 "We're a lot alike on the court. I've always liked that about him. His work ethic is off the charts. That's something I've always respected about him. His fitness, everything.," ATP quoted Serena as saying. "To do what he's done in an era where there are so many other great male tennis players, so much competition, to rise above it, not many people have done it. There are so many things to be admired," she added.

Murray and Williams have combined for nine single Wimbledon titles. Serena has also managed to win six doubles title with her sister Venus Williams. Serena also went on to win the mix doubles title in 1998 with Max Mirnyi. On the other hand, Murray was last seen in mixed doubles action at Wimbledon with Kirsten Flipkens in 2006. Andy Murray and Maria Sharapova As Wimbledon 2019 Mixed Doubles Partners? This Is What British Player Has to Say

Earlier, Murray revealed that he was not so sure about participating in the mixed doubles as many stars turned him down. This revelation by the tennis star sparked controversy on social media and many stars like Maria Sharapova, Billie Jean King offered to join Murray on the tennis court.The mixed-doubles draw will be revealed later today.