Harmanpreet Kaur on Her 51 Ball 103 Against NZ in Women's WT20 2018: Hitting Sixes Are 'My Way of Battling Stomach Cramps' 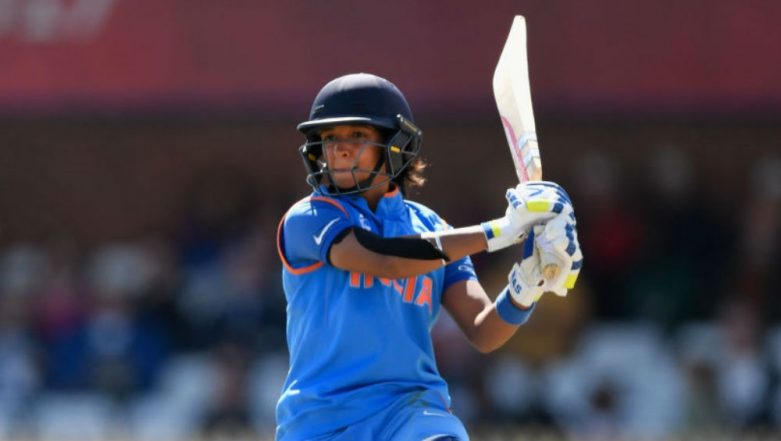 Guyana, November 10: For an ordinary cricketer, battling unbearable stomach cramp could well mean retiring to the cooler confines of the dressing room but if it is Harmanpreet Kaur, she would just hit eight sixes in order to avoid running. Harmanpreet Kaur Becomes First Indian Woman to Score Century in Women's WT20: Check Records Broken on the Opening Day of ICC Women's World T20 2018.

Known for her penchant to raise the bar on biggest platforms, the skipper smashed her way to an unbeaten 103 off 51 balls in India's comfortable 34-run win against New Zealand in the opening game of the ICC World T20. Harmanpreet Kaur's Historic Hundred Video Highlights: Indian Skipper's Century Guides India to Victory Against NZ IN ICC Women's World T20 2018.

"Yesterday, I was having little bit back problem," Kaur said after the match. "In the morning, I was not feeling well, when I came to the ground I was feeling a little low and getting some cramps."

The severe cramps hampered her running between the wickets as she came up with a different plan.

"When initially I was running twos, I got a little cramp, after that the physio gave me medicine, and a little bit it settled down," she said.

"Then I thought instead of running too much, if I could I get more big shots … because you run too much, you get more cramps. Then I told Jemi (Jemimah Rodrigues), 'if you give the strike to me, I can go for more big shots'," the skipper revealed.

Kaur, whose 171 against Australia in the ODI World Cup last year has become a stuff of legends, didn't know while batting that she had gone on to become first T20 centurion from the country.

"We knew they have really good batters, they have Sophie Devine and [Suzie] Bates, we knew if we scored just 150, we may not (win the game)."

Kaur felt that it was a good batting track where a set batswoman could score big.

"I knew it was a good batting track, if I settle down, I can get the runs, that's what I was thinking."

Her big-hitting prowess keeps bowlers all around the world on tenterhooks but the Indian skipper is hopeful that there might just be bigger and better things to come. "Yes, why not? Because every day is a learning day, today I learnt a lot."