As indicated by Variety, the 49-year-old business magnate is an uncommon illustration of a business big shot to be included as the host of the NBC late-night show. 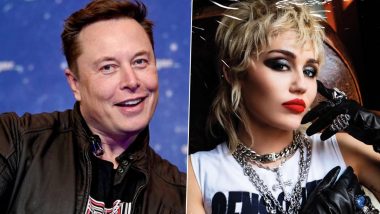 Saturday Night Live has roped in Tesla CEO Elon Musk to host the May 8 release of the well-known sketch show with musical guest Miley Cyrus. As indicated by Variety, the 49-year-old business magnate is an uncommon illustration of a business big shot to be included as the host of the NBC late-night show. The news comes on the heels of Musk's SpaceX travel venture adventure launching the second operational flight of its Dragon spacecraft to the International Space Station on Friday. Saturday Night Live Pays Heartfelt Tribute to Late Rapper DMX and Writer Anne Beatts.

Variety reported that New York Yankees owner George Steinbrenner facilitated 'SNL' in 1990. At that point, NBC programming head Brandon Tartikoff fronted the show in 1983 as the network began its storied run of success under his leadership. Musk has become one of the most talked-about business leaders of the past decade with his bold moves in the electric car arena with Tesla. He has also been a boss of the plan to at last build up a market for space tourism with his SpaceX venture. Daniel Kaluuya’s Hilarious Saturday Night Live Act Wins the Internet, Actor Takes a Dig at the British Royal Family – WATCH.

Despite the fact that Musk's different undertakings have had high points and low points, and his stewardship of Tesla has drawn significant criticism, he stays one of the most visible CEOs and tech entrepreneurs-impresarios of the moment. His fortune is estimated by Forbes at USD 177 billion. The episode will mark Cyrus' sixth visit to 'SNL' as a musical guest. Her latest album, 'Plastic Hearts,' was released last November.

Musk has been applauded as a visionary for furrowing ahead in areas that were daunting to other people. But his outsized compensation from Tesla and his personal behaviour has at times drawn flack from investors. Among other activities, Musk's Boring Company is working on building a loop for automobile traffic under the Las Vegas Strip around the city's convention centre, reported Variety.