British actor and writer Daniel Kaluuya, who hosted the April 3 episode of Saturday Night Live, used his opening monologue to discuss the differences between American and British racism. 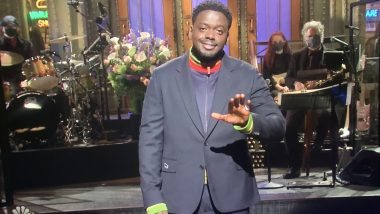 British actor and writer Daniel Kaluuya, who hosted the April 3 episode of 'Saturday Night Live', used his opening monologue to discuss the differences between American and British racism. According to Variety, London-born actor of Ugandan lineage stepped on the stage of Studio 8H in New York City to make his debut as a host on NBC's late-night sketch comedy series, and the first thing he noted was that he is "basically what the royal family was worried the baby would look like," referencing The Duke and Duchess of Sussex's son Archie. Minari Actor Steven Yeun Boards Jordan Peele’s Untitled Film Starring Keke Palmer and Daniel Kaluuya.

When the Oscar nominee said that people often ask him what's worse, American or British racism, an audience member could be heard loudly exclaiming "American racism," to which he said, "Let me put it this way: British racism is so bad white people left. They wanted to be free -- free to be able to invent their own kind of racism. That's why they invented Australia, South Africa, and Boston." For his Golden Globe winner and now Oscar-nominated role, Kaluuya played Fred Hampton, a Black Panther leader who fought for the rights of his community. In speaking about the activist, Kaluuya did not elaborate on the resistance he faced, but he did show a clip of him winning the Golden Globe when the start of his acceptance speech, which was on Zoom due to the COVID-19 pandemic forcing a virtual show was muted. Saturday Night Live: Oscar Nominees Carey Mulligan, Daniel Kaluuya Roped in as SNL Hosts for April.

“I’m Black and I’m British. Basically, I’m what the Royal Family worried the baby would look like”

"I felt like I was in the sunken place," he said, referencing his breakout role in Jordan Peele's 'Get Out'. Kaluuya also referenced his family being from Uganda, which he joked was from "his auntie." He said, "My mom is one of 22 kids and my dad is one of 49. My family's sperm is literally about that life. They say Black don't crack but condoms do." As per Variety, before Kaluuya kicked off the show, he spoke about a play he wrote when he was only 9-years-old, that he got produced "with real actors and everything", and that was based on 'SNL' cast member Kenan Thompson's previous TV series, 'Kenan & Kel'.