Dharmendra Back Home After Hospitalisation For Back Pain, Says 'Will Be Careful Now' (Watch Video)

Veteran actor Dharmendra on Sunday said he has returned home after three-four days of hospitalisation due to big muscle pull at the back. 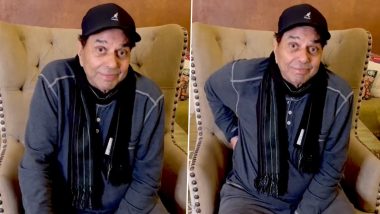 Veteran actor Dharmendra on Sunday said he has returned home after three-four days of hospitalisation due to big muscle pull at the back. The 86-year-old star took to Twitter and posted a video asking his fans and well wishers to not worry about his health. "Friends, don't do anything over. I did it and suffered a big muscle pull at the back. So I had to go to the hospital dor two-four days. It was difficult. Anyway I'm back with your good wishes, his blessings. So don't worry. Now I'll be very careful. Love you all," he said in the video. Dharmendra Health Update: Veteran Actor Discharged From Hospital, Shares A Video Message To All His Fans – WATCH.

Dharmendra, one of the biggest stars of Indian cinema, made foray into films with Arjun Hingorani's “Dil Bhi Tera Hum Bhi Tere” in 1960. Some of his best performances include classics such as “Sholay”, “Chupke Chupke”, “Yaadon Ki Baaraat”, “Satyakam” and “Seeta Aur Geeta”. Dharmendra Hospitalised; Veteran Actor Moved Out of ICU and Is Recovering – Reports.

Friends, i have learnt the lesson 🙏 pic.twitter.com/F6u8mtnTUl