Meghan Markle Reveals Her Kids Were 'Not Into' Halloween

During Meghan Markle's appearance on The Ellen DeGeneres Show on Thursday, she talked about celebrating Halloween with her two children, two-year-old son Archie and five-month-old daughter. 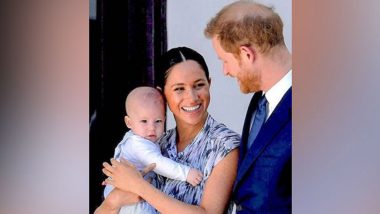 During Meghan Markle's appearance on The Ellen DeGeneres Show on Thursday, she talked about celebrating Halloween with her two children, two-year-old son Archie and five-month-old daughter Lili. "We wanted to do something fun for the kids, and then the kids were just not into it at all," she shared during her chat with the host. Bigg Boss 15: John Abraham and Divya Khosla Kumar, Antim Cast to Appear on Weekend Ka Vaar.

Meghan said that Archie had a dinosaur costume but only wore the outfit for "about five minutes." Meanwhile, Lili was dressed up as a skunk, "like Flower from Bambi," Meghan described it. The Wheel of Time Review: Rosamund Pike’s Fantasy Series is Impressively Mounted But Ain’t The Game of Thrones Fix We Need! (LatestLY Exclusive).

The Duchess of Sussex also opened up about another special Halloween she spent with Harry in 2016 when he came to visit her in Toronto (with his cousin Princess Eugenie and her now-husband Jack Brooksbank) before their relationship went public. "The four of us snuck out in Halloween costumes to just have one fun night on the town before it was out in the world that we were a couple," she explained.

Meghan said that the party had a post-apocalyptic theme, so they were covered up in "very bizarre" costumes that made them unrecognisable.

"We were able to just sort of have one final, fun night out," she said. Meghan wore a cream top with voluminous sleeves and paired it with black pants and matching pumps. Longtime friend and makeup artist Daniel Martin helped get her camera-ready alongside hairstylist Jason Low.

"We were backstage the entire time," Martin told People Magazine.

"It's really fun and Ellen really pulled out Meghan's goofy, funny side, which everyone will be able to finally see," he signed off.