The Wheel of Time Review: Rosamund Pike's Fantasy Series is Impressively Mounted But Ain't The Game of Thrones Fix We Need! (LatestLY Exclusive)

The Wheel of Time is a new fantasy show streaming on Amazon Prime Video that is an adaptation of the books of the same name. It stars Rosamund Pike, Josha Stradowski, Marcus Rutherford, Zoe Robbins, Barney Harris and Madeleine Madden. 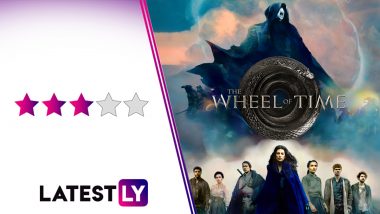 The Wheel of Time Series Review: Ever since Game of Thrones ended, people have been clamoring for another fantasy show that reaches those heights. Sadly, we haven't gotten that yet. With The Wheel of Time many were expecting to get that, and it isn't exactly that, and it's completely fine. Shows don't need to be compared, and I am glad that The Wheel of Time can still stand on its own. The Wheel of Time World Premiere: Rosamund Pike Looks Dreamy in a Dior Cruise 2022 White Silk Gown (View Pic).

The Wheel of Time follows Moiraine, played by Rosamund Pike, a powerful person who can use magic. She takes a group of four young people on a journey, and she believes one of them to be the reincarnation of a dragon, who is prophesied to either save the world, or destroy it. This is the basic premise of the show and it’s a fairly decent set up. The Wheel of Time has good world building to it and it genuinely feels like an universe rich with lore.

In the acting department, the highlight is definitely Rosamund Pike. Her as Moiraine is the type of casting that just works immediately. She is the part of a group called Aes Sedai, who are really powerful magicians and the first second you see her on screen you can feel that she has a commanding presence. It was very much impressive to watch her use magic powers when there was something going down.

The other highlight for me was Barney Harris as Mat Cauthon. A relatively new actor, Barney really channels the pain of Mat very well. From the entire group, Mat felt like the character with the most baggage to him, and I really liked how he presented himself on screen. I was very shocked to see him not have many major acting credits to him, cause he honestly is great in the role. Same goes for the entire group, the characters are great and I really liked watching them interact with each other. It added a much needed human element to this high fantasy show.

From a production standpoint too, The Wheel of Time looks spectacular. You can clearly see where those Amazon bucks have gone. The sets look extremely big and wonderful. The costumes are amazing and the soundtrack just gives the show so much more personality but, the CGI is very much janky at points.

A lot of the CGI here can look impressive, but sometimes you can notice that what you’re seeing isn’t exactly that convincing to look at. Trollocs are these monsters that we see in the show, and at times they look very impressive, especially in the close-up shots, but things take a turn for worse when you see them during an action scene. It just looks very inconsistent. Also talking about the action, a lot of it feels choppily edited. Just in a single scene you will see so many cuts. It makes the action hard to follow and honestly at some parts gave me motion sickness. I would have liked it if it was a bit better framed.

While The Wheel of Time also borrows certain elements from other fantasy universes like Game of Thrones or The Lord of the Rings, it might borrow sometimes a way too much. I have seen the story of “the chosen one” a thousand of times. Yet another fantasy show comes in with a similar concept and it just doesn’t feel that new to me. It feels like a retread at times. Thankfully things are kept a bit fresh with the group dynamic. OTT Releases of The Week: Kartik Aaryan’s Dhamaka on Netflix, Rosamund Pike’s The Wheel of Time on Amazon Prime Video, Jimmy Sheirgill’s Your Honour Season 2 on Sony LIV and More

Also it can be very exposition heavy at times. In the first episode itself I was overwhelmed with the amount of info that was thrown at me. It just left me so confused with how many concepts I would have to keep a track of. Rules and character relationships are being established left and right with no room to breathe in between. I would have liked it if they would have taken a bit of time with the way they introduced elements.

Given its criticisms, The Wheel of Time is still a fun show that will leave you impressed and wanting more of this universe. There is definitely a lot of potential here to be the next big fantasy show, it’s only a matter of when it will achieve that. Hopefully going forward, it does. The Wheel of Time is streaming on Amazon Prime Video.

(The above story first appeared on LatestLY on Nov 19, 2021 08:26 PM IST. For more news and updates on politics, world, sports, entertainment and lifestyle, log on to our website latestly.com).