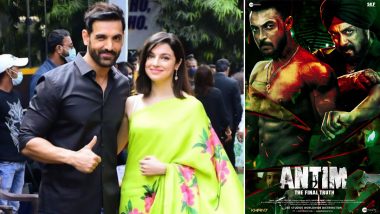 The Weekend Ka Vaar episode of Bigg Boss 15 will see Bollywood actors John Abraham and Divya Khosla Kumar coming to the house to promote their movie Satyameva Jayate 2. They will be joined by the cast of 'Antim: The Final Truth', including director Mahesh Manjrekar, and actors Aayush Sharma and Mahima Makwana. Bharti Singh and Haarsh Limbachiyaa will also be there to have some fun at the expense of the contestants. Bigg Boss 15: Rashami Desai, Devoleena Bhattacharjee Going to Be New Wild Card Entries – Reports.

The upcoming episode will also see Karan Kundrra feeling betrayed as Tejasswi Prakash and Vishal Kotian appear to be coming closer to each other. Karan is seen getting jealous and upset as well. Bigg Boss 15: Shamita Shetty All Set To Return to the Show Before Salman Khan’s Weekend Ka Vaar – Reports.

And when he discusses his predicament with Umar Riaz, Karan is told that Tejasswi is just playing a game. Umar advises him to talk to Tejasswi and resolve the matter. Bigg Boss 15 airs on Colors.

(The above story first appeared on LatestLY on Nov 19, 2021 08:41 PM IST. For more news and updates on politics, world, sports, entertainment and lifestyle, log on to our website latestly.com).