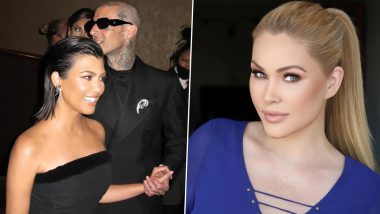 "Congratulations to the happy couple. I wish them the best that life has to offer on their journey together," said Moakler who was married to Barker from 2004 to 2008 and shares two children daughter Alabama, 16, and son Landon, 18 with him. Moakler is also mother to 23-year-old daughter Atiana De La Hoya who she shares with ex-beau and former pro boxer Oscar De La Hoya.

For the unversed, TMZ reported on Tuesday that Travis Barker and Kourtney Kardashian eloped at a Las Vegas chapel at approximately 1:30 am local time on Monday. Insiders told TMZ that Kardashian and Barker did not allow the venue to take pictures and had their own photographer and security instead. They reportedly asked for an Elvis Presley impersonator to officiate the ceremony. Also, the duo might have tied the knot in Las Vegas after Sunday's 2022 Grammy Award ceremony but there is nothing legal about it, as they have not received a marriage license, sources told Page Six.

After initially sparking dating rumours back in December 2020, the couple confirmed their romance on Instagram in February 2021. They got engaged just eight months later, when Travis popped the question in a dreamy, beachside proposal at the Rosewood Miramar hotel in Montecito, California.

This is Kourtney's first marriage, although she has three children with ex-boyfriend Scott Disick. Meanwhile, her rocker beau has been married twice before. First to Melissa Kennedy from 2001 to 2002 and Shanna Moakler from 2004 to 2008. He shares son Landon and daughter Alabama with Moakler, as per Page Six.