94th Academy Awards: Rachel Zegler, West Side Story Actress, Is Not Invited To The Oscars

West Side Story star Rachel Zegler has shared on social media that she has not received an invitation for the 94th Academy Awards on March 27. 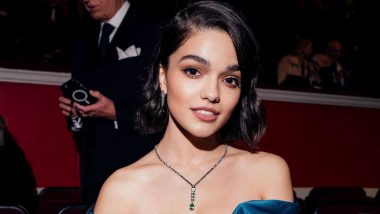 Washington, March 21: West Side Story star Rachel Zegler has shared on social media that she has not received an invitation for the 94th Academy Awards on March 27. On Sunday, the actor, 20, posted a series of images on her Instagram account along with the caption "a quarter of the year well spent." Oscars 2022: Rami Malek, Simu Liu, Lily James and More Stars To Be Present at the 94th Academy Awards.

In the comments section, a user wrote, "Can't wait to see what you'll be wearing on Oscar night." Zegler responded in the comments, writing, "i'm not invited so sweatpants and my boyfriend's flannel."

For the Academy Awards, each nominee and presenter is offered a pair of tickets. Other tickets come out of allotments given to each studio, although the Academy not infrequently finds additional tickets for VIPs who wish to attend. Zegler elaborated, suggesting that she has attempted to obtain a ticket and shared how proud she is of the project.

She added, "idk y'all i have tried it all but it doesn't seem to be happening :') i will root for west side story from my couch and be proud of the work we so tirelessly did 3 years ago. i hope some last minute miracle occurs and i can celebrate our film in person but hey, that's how it goes sometimes, i guess. thanks for all the shock and outrage-- i'm disappointed, too. but that's okay. so proud of our movie."

Steven Spielberg's West Side Story is competing for best picture in a category that includes The Power of the Dog and CODA. The film received six other nominations including best director and best supporting actress for Ariana DeBose. While Zegler is not nominated for an Oscar, she won a Golden Globe for her performance as Maria.