Hollywood actors Lucy Boynton and Will Poulter are set to star in Hugh Laurie's adaptation of 'Why Didn't They Ask Evans?', one of Agatha Christie's earliest murder mystery novels. 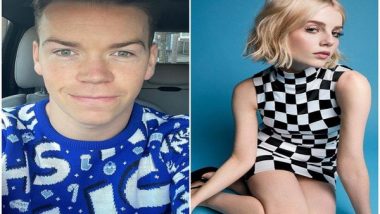 Washington [US], June 10 (ANI): Hollywood actors Lucy Boynton and Will Poulter are set to star in Hugh Laurie's adaptation of 'Why Didn't They Ask Evans?', one of Agatha Christie's earliest murder mystery novels.

According to Variety, Laurie is set to direct and act in the three-part series for BritBox North America, in which he plays the creepy Dr. James Nicholson, a clinical director of a sanatorium.

Christie published 'Why Didn't They Ask Evans?', which followed the story of Bobby (Poulter) and shrewd socialite Lady Frances (Boynton) as they untangle a murder mystery, in 1934. In classic Christie fashion, there are plenty of twists and turns until the perpetrator is finally unmasked.

Boynton said, "I'm so thrilled to be working with Hugh and Will, and on this story from one of my favourite authors. I can't wait to get started." She won't have to wait long with production kicking off this week.

"I'm deeply honored to have been given the opportunity to co-lead this project with Lucy and the chance to bring Agatha Christie's thrilling story to life under Hugh's direction," said Poulter.

The duo is joined by a stellar cast including Maeve Dermody, Conleth Hill, Daniel Ings and Jonathan Jules.

Appearing alongside them in the mini-series are Miles Jupp, Amy Nuttall, Alistair Petrie and Paul Whitehouse. Morwenna Banks and Joshua James are also set to appear. The mini-series was commissioned by BritBox North America and produced by Mammoth Screen and Agatha Christie Limited.

As per Variety, it is executive produced by Emily Powers, Gina Cronk and Jonathan Karas for BritBox North America and produced by Claire Jones for Mammoth Screen, alongside executive producers Damien Timmer and Helen Ziegler. James Prichard from Agatha Christie Limited will also produce Endeavor Content is handling international sales outside of the U.K., Ireland and the Americas. (ANI)