Grammys 2021: Billie Eilish's 'Everything I Wanted' Bags Record of the Year Grammy Award

American singer-songwriter Billie Eilish snagged the award in the record of the year category for 'Everything I Wanted' during Grammys 2021. 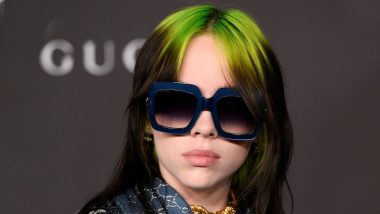 Taking the stage after being announced as the winner of the coveted award by Ringo Starr, Eilish began her speech by stating that she believed the award deserved to go to her fellow nominee, Megan Thee Stallion. "This is really embarrassing for me. Megan, girl! I was gonna write a speech about how you deserve this, but then I was like, 'There's no way they're gonna chose me.' I was like, 'It's hers'," Eilish said. Grammy Awards 2021: Billie Eilish Makes History After Winning for Unreleased James Bond Theme Song in No Time To Die.

"You deserve this. You had a year that I think is impalpable. You are a queen, I want to cry thinking about how much I love you. You're so beautiful. You're so talented. You deserve everything in the world," she continued.

Eilish added, "I think about you constantly, I root for you always. You deserve it, honestly, genuinely, this goes to her. Can we just cheer for Megan Thee Stallion, please?"

Eilish concluded her speech, "I really do appreciate this. Thank you to the academy, thank you to Ringo. I love you, I love my team. Thank you for seeing me and thank you to my brother Finneas." Eilish's track 'Everything I Wanted' was also up for Song of the Year and Best Pop Solo Performance. She was also up for Best Song Written for Visual Media for her track 'No Time to Die' from the James Bond film of the same name, which Eilish won.

Congrats Record Of The Year winner "everything i wanted" - @billieeilish: https://t.co/QPXIcT5X82 #GRAMMYs pic.twitter.com/K18afmy5HZ

Last year, she took home five Grammys including Song and Record of the Year for 'Bad Guy'. Her debut album 'When We All Fall Asleep, Where Do We Go?' won Album of the Year and Best Pop Vocal Album. She was also the winner of Best New Artist. The Grammy Awards, hosted by Trevor Noah, were delayed owing to the ongoing Covid-19 pandemic. The annual show shifted from its original January 31 broadcast to March 14. The ceremony honours musical artists, compositions, and albums across 84 categories. Though usually held at the Staples Center, this year's festivities will take place at the Los Angeles Convention Center.