Get latest articles and stories on Health at LatestLY. It is not an unknown fact that alcoholism is linked to the mortality rate of an individual, but now a study has revealed the correlation between the weight of an alcoholic individual and their death rate. 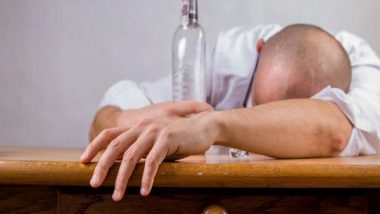 Pennsylvania [US], January 25 (ANI): It is not an unknown fact that alcoholism is linked to the mortality rate of an individual, but now a study has revealed the correlation between the weight of an alcoholic individual and their death rate.

The study published in the journal 'Drug and Alcohol Dependence' has found that underweight people, who drink excessively may be at an even higher risk of dying from heart disease, cancer and other causes than those who are overweight.

The study was based on data from the National Health Interview Survey (NHIS), which has a nationally representative sample of more than 200,000 U.S. adults aged 35-85, interviewed between Jan. 1, 2001, and Dec. 31, 2011. The researchers analyzed data on mortality risk among drinkers and non-drinkers using the Centers for Disease Control and Prevention (CDC) categories to define "underweight," "normal weight," "overweight" and "obesity."

"The NHIS is like a 'selfie' for the U.S. because it is a snapshot of health behaviours of people from every type of background," said Muntasir Masum, postdoctoral scholar at the Edna Bennett Pierce Prevention Research Center at Penn State. "We expected to see a link between obesity and mortality related to alcoholism, and we were surprised to see that the link was especially pronounced for people with underweight who drink excessively."

The CDC defined underweight as having a body mass index (BMI) of less than 18.5 using the calculation of person's weight in kilograms divided by the square of their height in meters. According to the CDC, BMI is a screening tool, but it does not diagnose "body fatness or the health of an individual."

Further research was needed into how having underweight could contribute to mortality in people who drink excessively. Masum suggested that multiple factors could be at play, such as how people handle stress and whether they have co-occurring health issues or nutritional deficiencies.

"I hope these findings encourage people to eliminate risks that may lead to a life-or-death situation," said Masum.

Excessive alcohol use has been reported as the third most common cause of preventable death in the U.S. and was estimated to cause 1 in 10 deaths among working-age adults in the U.S., according to the Journal of the American Medical Association. (ANI)