AAP has bagged a historic win in Punjab Assembly polls by winning a three-fourths majority with 92 seats - the highest number of seats won by any party in the state in over four decades. 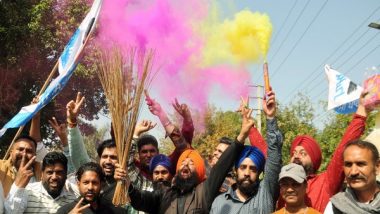 Chandigarh, March 10: AAP has bagged a historic win in Punjab Assembly polls by winning a three-fourths majority with 92 seats - the highest number of seats won by any party in the state in over four decades.

It is AAP's maiden victory in the state and a vast improvement from its performance in the 2017 elections when it had finished second behind Congress. Punjab Assembly Election Results 2022: AAP Sweeps State With Three-Fourth Majority, Bhagwat Mann Set to be Next CM.

The ruling Congress managed to secure 18 seats in the 117-member Assembly while Bharatiya Janata Party (BJP) ended up with two. Shiromani Akali Dal (SAD) has bagged three seats and Bahujan Samaj Party has won only one.

In the 2017 Punjab Assembly polls, Congress won 77 seats in the 117-member House whereas Shiromani Akali Dal could win only 15 seats, BJP netted three and independent candidates won two seats. On the other hand, AAP emerged as the second-largest party with 20 seats.

AAP's chief ministerial candidate Bhagwant Mann, MP from Sangrur on Thursday said that he will take the oath as Punjab's Chief Minister in Bhagat Singh's village Khatkarkalan, and not at the Raj Bhawan in Chandigarh. His mother Harpal Kaur said that her son is on the right path.

With Shiromani Akali Dal (SAD) winning only three seats, party's chief Sukhbir Singh Badal said that they whole-heartedly accept the mandate of the people adding that the party will continue to serve the people.

"We whole-heartedly & with total humility accept the mandate given by Punjabis. I am grateful to lakhs of Punjabis who placed their trust in us & to SAD-BSP workers for their selfless toil. We will continue to serve them with humility in the role they have assigned to us," Badal tweeted.

He said, "As the president of SAD, I congratulate AAP and Bhagwant Mann on their victory in the Punjab poll. I offer them my sincerest good wishes for success and I am sure they will live up to the people's expectations."

On the other hand, Congress went into the polls having battled factionalism and anti-incumbency.

Congress could not overcome the anti-incumbency of 4.5 years under the leadership of former Punjab chief minister Captain Amarinder Singh and thus people of the state voted for AAP for change, said Congress General Secretary Randeep Singh Surjewala on Thursday.

"I take the responsibility for party's descent in these elections. However, mine or any other's resignation is party's internal matter," said Chaudhary.

"I humbly accept the verdict of the people of Punjab and Congratulate @AamAadmiParty and their elected CM @BhagwantMann Ji for the victory. I hope they will deliver on the expectations of people," Channi said in a tweet.

Notably, in an unprecedented manner, several political stalwarts in Punjab also lost the constituencies on which they were contesting. These include former chief ministers Parkash Singh Badal and Amarinder Singh, Channi, Sukhbir Singh Badal, Sidhu and SAD's Bikram Singh Majithia.