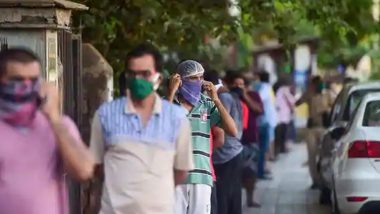 The death toll climbed to 4,54,712 with 443 daily fatalities, according to the data updated at 8 am. Also Read | Haryana Shocker: 5-Year-Old Girl Raped And Murdered By Neighbour In Gurugram’s Bhondsi; Accused Arrested.

The daily rise in new coronavirus infections has been below 30,000 for 31 straight days and less than 50,000 daily new cases have been reported for 120 consecutive days now. Also Read | Lalu Prasad Yadav Says 'RJD Candidates Would Lose Deposit in Elections if They Remain in Alliance With Congress in Bihar'.

The number of people who have recuperated from the disease surged to 3,35,67,367, while the case fatality rate was recorded at 1.33 per cent. The cumulative doses administered in the country so far under the nationwide COVID-19 vaccination drive has exceeded 102.27 crore.

India crossed the grim milestone of two crore on May 4 and three crore on June 23.