A leopard entered a college and attacked a student in Chharra area of Aligarh district on Wednesday. 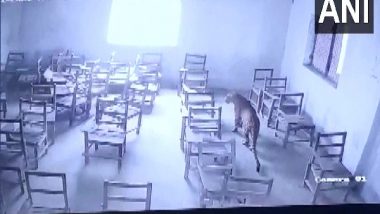 Aligarh, December 2: A leopard entered a college and attacked a student in Chharra area of Aligarh district on Wednesday. The student has sustained injuries.

Dharmendra Sharma, District Inspector of Schools, said, "The principal of Chaudhary Nihal Singh Inter College informed me that a leopard has entered the college at around 10 am. The District Forest Officials and other authorities have been informed by the college."

#watch: A student of class X was attacked by a #leopard while he was entering his class at Chaudhary Nihal Singh inter college in #Aligarh’s Chharra area around 8:30 am today. The student has been sent to a hospital for treatment. Rescue operation in on. pic.twitter.com/za1Iee7fSJ

He further added, "A student has sustained injuries and rushed to a hospital. He is completely stable."